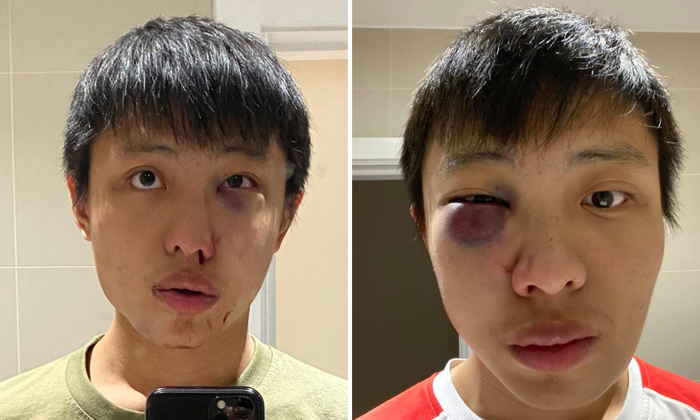 More shock than anger or fear – that was what Singaporean student Jonathan Mok felt when he was jumped by a group of strangers in London in a coronavirus-related racism attack on Feb 24.

The 23-year-old final-year law student at the University College London opened up about his ordeal on Wednesday (March 3) on Facebook and posted two photos of himself showing a swollen eye.

“I always felt that London was one of the most open places and this incident doesn’t change the fact that most people are nice; it’s just a few (who aren’t),” Mr Mok told The Straits Times on Wednesday of the assault.

“But even with a minority of people (who engage in this behaviour), it is a very serious problem.”

The attack happened in Oxford Street, near the London Underground's Tottenham Court Road station at around 9.15pm after he walked past a group of young men.

He turned around and looked at them after he heard one of them say “coronavirus ”.

The man then shouted, “Don’t you dare look at me, you...” and punched him in the face twice as passers-by tried to stop the group.

Mr Mok said that another man shouted, “I don’t want your coronavirus in my country” before punching him in the face again.

The group fled before the police arrived.

The Metropolitan Police in London told ST they are investigating a “racially aggravated assault” in which a 23- year-old man was “punched and sustained facial injuries”, referring to Mr Mok without naming him.

During the attack, Mr Mok said people in a nearby souvenir shop came out to try to defuse the situation. Since the attack, he visited the shop to thank the people there and they provided him support and shared his sentiments about racism issues.

The Metropolitan Police said no arrest has been made, but they are currently trying to identify the suspects through inquiries and available closed-circuit television footage. They have been in touch with Mr Mok since the incident.

He was told at a hospital’s accident and emergency department that he had fractures on his face and might have to undergo reconstructive surgery.

“I thought it was important to share and start the debate,” Mr Mok said of his post, which has since garnered more than 6,400 reactions and 23,000 shares. “Race issues have been prevalent for so long and this shows how dangerous they can be... Even when they start off verbally, they can escalate to physical violence.”

On Facebook, he wrote: “Why should anyone, simply because of the colour of their skin, be subjected to abuse, in any form, verbal or physical? Why should I keep quiet when someone makes a racist remark towards me.

“Racism is not stupidity – racism is hate. Racists constantly find excuses to expound their hatred – and in this current backdrop of the coronavirus, they’ve found yet another excuse.”

The University College London said it is offering support to Mr Mok.

“We are horrified to hear about this unprovoked racially-motivated attack on a member of our community," said a spokesman on Wednesday. "We condemn racism, bullying and harassment of any kind."

Mr Mok said that the BBC and CNN contacted him for comment, while Singapore’s High Commission in London contacted him to offer support.