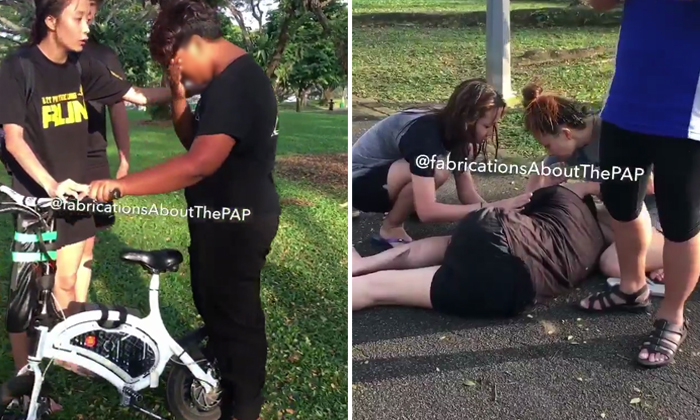 A 13-year-old youth was arrested after allegedly knocking down a woman while riding his personal mobility device (PMD) at Pasir Ris Park on Friday (Dec 28).

In response to a Stomp query, the police said they were alerted to a case of rash act causing hurt at 5.53pm and arrested the e-scooter rider.

Stomper Patrick alerted Stomp to a video of the incident that was posted on Facebook.

In the video, a woman can be seen lying on a pavement while a couple of girls attended to her.

Stomp understands that the woman, believed to be in her 20s, suffered superficial injuries and was taken to Changi General Hospital.

The video also shows several people surrounding a youth, who is seen holding on to a PMD.

Voices can be heard telling the youth "I know it's an accident" and asking him to "calm down".

When the youth said "I'm very sorry", a female can be seen patting him on the shoulder and replying, "I understand, I understand."