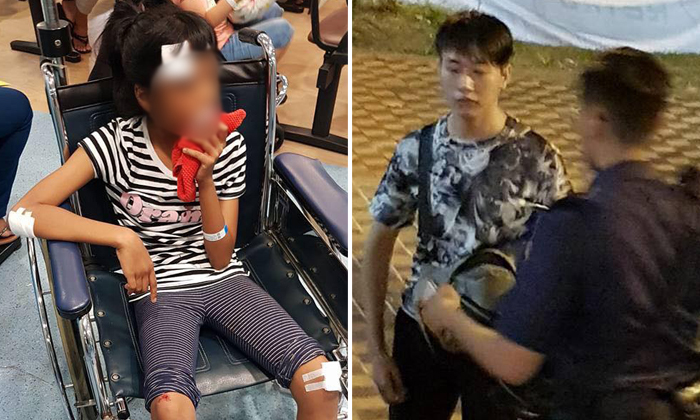 A 24-year-old man was arrested after allegedly knocking down an 11-year-old girl while on his electric scooter yesterday evening (April 12), near Pasir Ris Community Club.

Facebook user Zam Riffzam had posted about how the man "banged into my daughter from the back" at around 7.20pm.

He also shared photos of police officers speaking to the suspect.

Another picture showed his daughter seated on a wheelchair and holding a towel to her mouth. She also had bandages on her forehead, knee and elbow.

In response to a Stomp query, the police said they were alerted to a case of rash act causing hurt along Pasir Ris Drive at 8.30pm.

The girl, who had just finished tuition classes at the community club and was walking on the pavement, was conscious when taken to KK Women’s and Children’s Hospital.

According to The Straits Times, Mr Riffzam said his daughter sustained a tear on her gums, which received several stitches, in addition to having two teeth missing.

The victim, who was given seven days of medical leave, also suffered abrasions on her head, face, elbow and knees.

Her father added: "When I took the towel away, I saw that her jaw was misaligned and her gums appeared to be pushed back."