11 rabbits believed to be abandoned at Admiralty Park and Tanjong Beach, some still missing 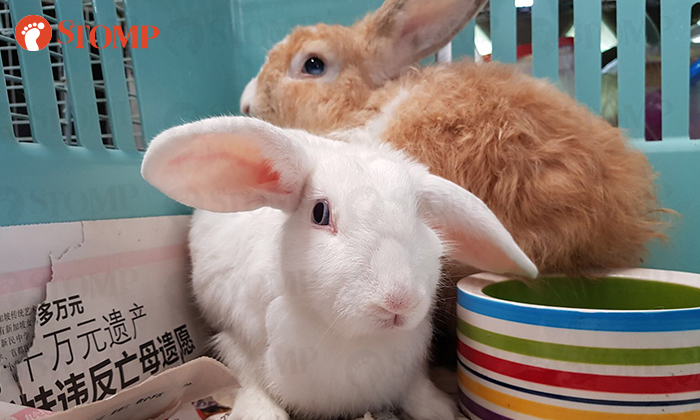 A total of 11 rabbits were believed to be abandoned in the vicinity of Admiralty Park and Tanjong Beach in the past week.

One rabbit last seen in Admiralty Park while four other rabbits in Tanjong Beach are said to still be missing.

On Dec 25, Bunny Wonderland was alerted to 4 rabbits sighted on a walking trail in Admiralty Park at 5pm.

Three of the rabbits were brown while the other was said to be white and lop-eared.

Society for the Prevention of Cruelty to Animals (SPCA) later confirmed with the organisation that there were actually a total of 6 rabbits sighted.

One rabbit, however, still remains missing.

Lynne told Stomp, "(The) spotter described it to be brown with upright ears and is more timid."

As for the abandoned rabbits at Tanjong Beach, there were a family of five rabbits seen, two white adults and 3 white or grey babies.

Three of the rabbits were said to have been spotted straying near the carpark lot 188.

However, the spotter only managed to rescue one rabbit and the other two ran away.

There are still four missing rabbits that were last sighted in Tanjong Beach.

"Abandoned rabbits need to be rescued as soon as possible as they will not survive in (the) wild. Once rescued, the public can contact rescue groups such as SPCA, House Rabbit Society Singapore (HRSS) or Bunny Wonderland to take over the care of them."

"If members of the public have rescued these missing rabbits (1 in Admiralty Park, 4 in Sentosa), please inform Bunny Wonderland (email bunnywonderlandsg@gmail.com) as our concerned volunteers as well as members of public are still searching for them every day."

She added that the public can also call the SPCA hotline and stay at the location to watch over the animals if they are unable to rescue the animals themselves.

Abandonment of pets is a serious offence and Under the Animals and Birds Act, anyone who is found guilty of cruelty to animals, including abandonment, can be imprisoned for up to 18 months, fined up to $15,000, or both.