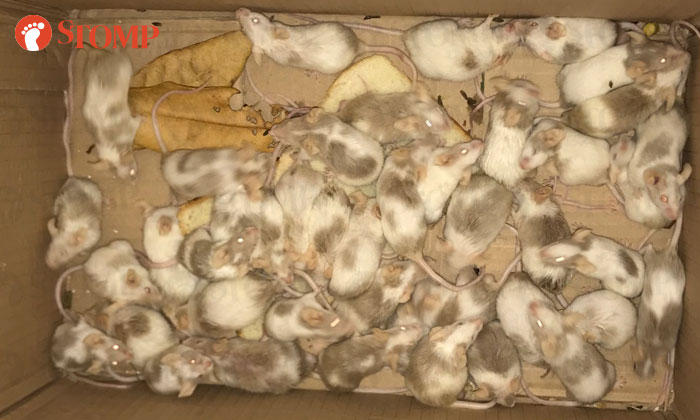 Stomper Lachowski was dropping off a friend at a condominium along Pasir Ris Drive 4 on Sep 12 when she saw a group of people gathered around a box.

Upon approaching, she saw them picking up small objects which turned out to be baby mice, at least 50 of them.

"I was told by other passers-by that they saw two people roaming around the area before this group of people discovered the abandoned mice.

"I believe this is a case of overbreeding and the owners could no longer manage them so they decided to abandon these mice at the field opposite the Ripple Bay and Watercolours condominiums."

The Stomper said she left the area soon after and was not sure of what happened but praised those who stopped to help the abandoned mice.

According to The Straits Times, the mice were handed over to the Society for the Prevention of Cruelty to Animals (SPCA) where they are undergoing health checks.

They will then be put up for adoption if found healthy.

"We suspect it is a case of pet abandonment because these are not stray mice but mice that are commonly used in laboratories, which are very tame and can be kept as pets. And there were so many of them in one place."

She added that the chances of such domesticated animals surviving in the wild are slim.

The SPCA is appealing for information regarding the incident and the Agri-Food and Veterinary Authority of Singapore (AVA) is investigating the incident.

For pet abandonment, first-time offenders can be fined up to $10,000, or jailed for a year, or both.