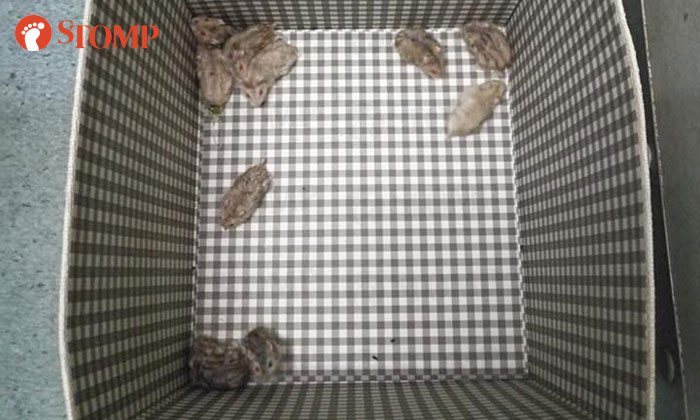 Stomper Bells was shocked when she found 12 hamsters at the foot of Block 38 Tanglin Halt Road on Oct 3.

She had come down from her home when she noticed a cat attacking what she thought was a rat.

"It seemed too small so I got closer and realised that it was a hamster," said Bells.

Unfortunately, that one hamster did not survive the attack and Bells found its body in pieces.

She then found more hamsters in a grass patch nearby.

In total, she managed to save 11 of them and asked her daughter to bring her a box to put them in.

Another hamster which was found with blood under its eye died, two hours after being rescued.

"I really wish that the Society for the Prevention of Cruelty to Animals (SPCA) or the authorities can do something about these abandoned pet cases," said the Stomper.

"This is not the first time I have found a hamster under my block."

Bells has since reached out to friends through social media who may be interested in adopting and providing a safe home for the 10 rescued hamsters.

She is heartened by the response and has found homes for 5 of the hamsters already.