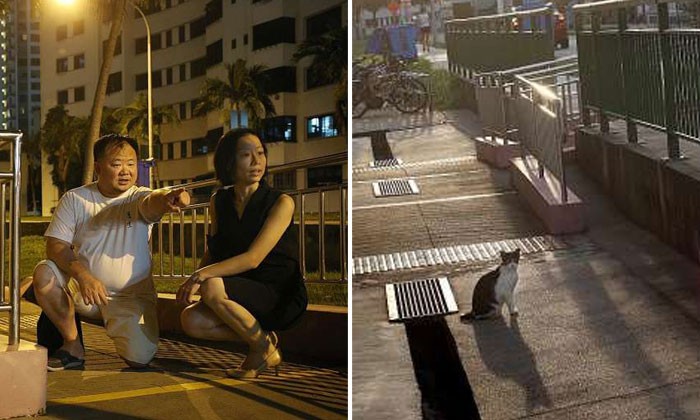 When residents of Dakota Crescent moved out of the estate last month, what they left behind were more than pots and pans.

Instead, "meows" from frightened cats can sometimes be heard from four of the vacated blocks in the estate, which has been earmarked for redevelopment.

A group of volunteers has so far found 23 cats in the deserted estate.

The team believes most were house pets as they wear collars, are found near specific units, or are potty-trained.

The group of five, which calls itself Team Dakota, is now hoping to find new homes for the stranded felines before demolition starts, though it is not known when this will begin.

The Housing Board had asked residents to move out by Dec 31 last year. It has plans to rejuvenate the iconic estate built in the 1950s.

The volunteers have yet to complete a count of the cats in all 17 rental blocks.

Ms Tan Peiying, 36, one of the volunteers, told The Straits Times that the team came to know of the situation in Dakota Crescent last month, when two volunteers took a walk around the estate.

"We are all animal lovers and we decided to do something for the cats, and got together to start the initiative last month," said Ms Tan, an office administrator.

To date, the team has relocated six of the 23 cats, as well as four others from the vicinity, to new homes or commercial boarding facilities.

"We hope as many as possible ex-house cats can be rehomed. For those which are ill, we hope they can receive palliative care and treatment, especially if they are elderly and chronically ill."

Once a cat is rescued, Team Dakota members take it to a vet and pay for its medical bills.

They post receipts of the treatment on its Facebook page, and sponsors can decide how much they would like to contribute. Expenses are also reflected on a public Excel sheet on the team's Facebook page.

As a gauge, a medical consultation to determine a cat's health starts from $35.

The fees to board two cats in a single room costs about $450 a month in a commercial boarding facility, said Ms Tan.

Ms Veron Lau, a representative from the Cat Welfare Society, said the society has observed that owners often leave their cats behind when they leave or move.

A prominent example was when the Tanjong Pagar Railway Station went out of service in July 2011, she said. About 50 cats were left behind when the station closed, prompting the society to tie up with pet shop chain Pet Lovers Centre to organise a three-month adoption drive.

Compared to cats, left-behind dogs are less of a problem as all dogs have to be licensed, which means their ownership can be traced.

She said: "There have been active sterilisation exercises through the years by various volunteer teams for both community cats and pet cats to keep cat numbers under control, or the problem could have been worse.

"Still, finding homes for the cats left behind isn't a small feat, and it is heartening to see people coming forward to give this case and the cats the necessary attention."

• For more information, visit Dakota Cats Cry Out for Help on Facebook.