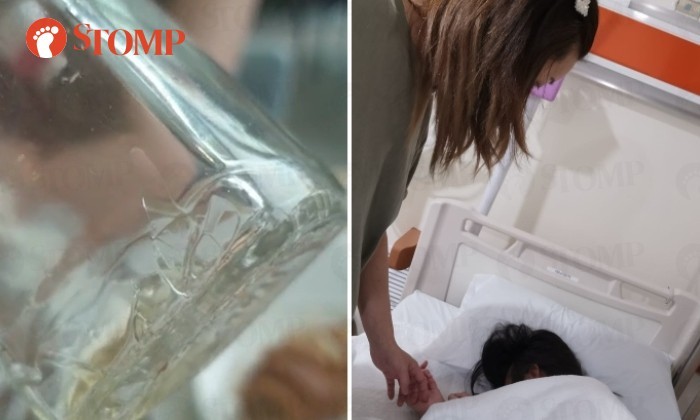 What was supposed to be a fun hotel staycation turned into a nightmare for a 10-year-old girl and her parents after the girl drank juice from a broken glass bottle that was served to her.

The incident occurred at W Hotel, which is located at Sentosa Cove, on Friday (Dec 4).

Stomper Kong and Stomper Lily had been on the staycation with their two daughters. Stomper Wang, a friend, had invited the family of four to join him on this mini getaway.

The trio shared their frustrations to Stomp after the incident happened on the hotel's premises at around 10.30am.

According to Chinese-language newspaper Lianhe Wanbao, Lily said that her family and Wang's family were eating breakfast at the hotel when her elder daughter Angela, who was drinking apple juice, suddenly spat out a piece of transparent object.

Lily said her daughter told her that it was plastic, but the former did not pay much attention to the situation as she was feeding her younger daughter, who is four.

She told Wanbao that she asked Angela to wrap the transparent object in tissue and throw it away. Angela did so, and subsequently proceeded to drink the entire bottle of apple juice.

However, Lily realised something was amiss when her daughter started shaking the glass bottle and it made a squeaking sound which seemed to sound like broken glass.

Lily said she inspected the glass bottle closely, only to realise that there were many pieces of glass shards at the bottom of the bottle.

She also noticed that there was gap at the base of the bottle, which was the part where the glass had broken off.

Their friend Wang immediately told the hotel manager about the situation, who apologised and wanted to clear the broken glass bottle.

However, Wang shared his intention of keeping the glass bottle as he wanted to retain the "evidence".

Wang and Lily ended up calling the police, despite the hotel manager saying that there was no need to.

Kong, who was not at the hotel at the time, told Stomp: "When I knew about this, I rushed back. The operations director of the hotel attended to my wife and daughter and asked them whether they took the bottled drink from the fridge themselves.

"Then, he asked whether she knocked the bottle on the table beforehand. I was shocked because he should be attending to my daughter, not questioning her."

Kong said he felt that there was "no concern or empathy" given to his daughter during this incident.

"I'm from China, so I can't speak proper English but I can still understand what's going on," Kong said.

"Many of the discussions with the hotel managers were done with my friend around as he speaks fluent English and is able to help me translate.

"Throughout these discussions, we felt like we were despised and looked down upon. It was not a nice feeling. Plus, we didn't want to be questioned. We just wanted to send our daughter to the hospital."

Kong shared that after two hours of discussions with the hotel, they ended up taking Angela to Mount Alvernia Hospital.

According to Chinese-language newspaper Lianhe Zaobao, Angela's mother, Lily, had originally wanted the doctors to use a gastroscope to inspect her daughter's stomach. However, the doctors said it was not necessary as there was no internal bleeding.

"She seems to be fine for now and can be discharged soon. The doctor said we need to keep an eye on her as there could be internal bleeding when glass shards are ingested," Lily told Zaobao.

"We are happy she's okay but she's still afraid to drink from a glass. In fact, she gets more fearful every time she thinks about the incident."

According to Zaobao, the general manager of Hotel W had called to send his well wishes as well as expressed his intention to pay the medical bills and visit Angela, which Lily declined.

However, the family denied this and told Stomp that no such offer was made.

"Despite this sad experience, we still want to compliment three of the restaurant staff members for being attentive and polite to us," said Lily.

"They were cheerful and positive and we just want to tell them to keep up the good work." 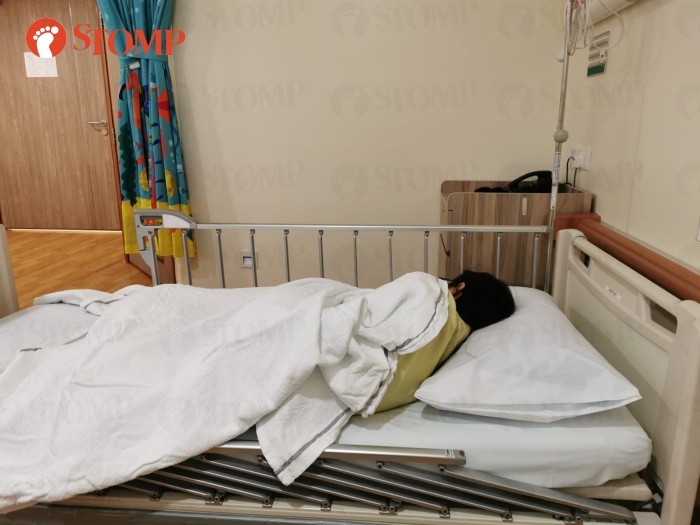 (Photo of Kong's daughter, Angela, in the hospital)

In response to a Stomp query, a spokesman for W Hotel said: "We are aware of a recent incident involving one of our guests at W Singapore – Sentosa Cove. The safety and wellbeing of our guests is of the utmost importance to us and we view this matter very seriously.

"As soon as we were notified, we followed the necessary safety protocols including offering assistance to seek medical attention."

The W Hotel spokesman added that they are currently in regular contact with the guest and are working closely with the relevant parties to address this matter.

The police also said in response to queries that they received a call for assistance at W Hotel at 11.27am.

"The involved parties were advised accordingly. No further police assistance was required," added the police spokesman.