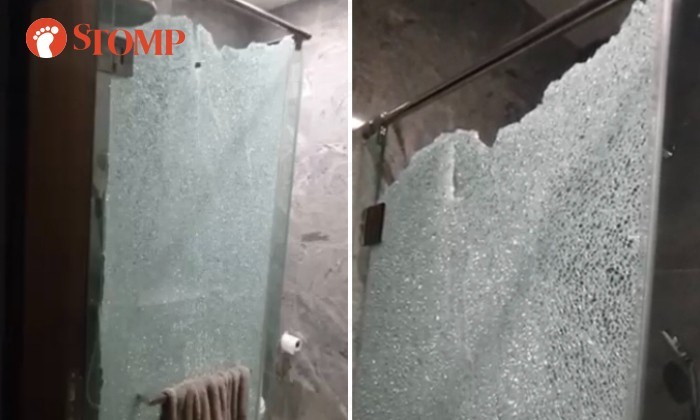 A resident was horrified when the tempered glass door in his bathroom suddenly shattered in his eCo condominium unit in Bedok on Oct 11.

Stomper Joshua, who is a resident tenant at eCo condominium, heard an exploding sound from his bathroom at 12.17am.

He sent videos of the aftermath to Stomp.

In the video, the glass door in his bathroom is completely shattered, and pieces of glass can be seen on the floor.

“There was a huge bang and, when I opened the door, glass was everywhere,” said Joshua.

“Thank goodness I wasn’t in the shower. I dread to think of the horrific injuries that could be caused by exploding glass.

“I worry about other tenants who have young children.

“I’m very glad that Stomp reported about a similar incident that happened at eCo condominium last year, as it made me understand what happened here."

Stomper Joshua shared that he has lived in eCo condominium since 2017, one year after Far East Organization attained its Temporary Occupation Permit (TOP) to rent out the units.

In response to a Stomp query, Mr Augustine Tan, Executive Director of the Property Services Division at Far East Organization, said: "The safety of our residents is important to us.

"Upon being contacted by the resident, we made arrangements to clear the remnants of the tempered safety glass and carried out an investigation within the same day.

"We have since taken steps to assist the owner of the unit in resolving the matter.”

According to glass experts, spontaneous shattering occurs only in tempered glass, which is the material of Joshua's shattered bathroom door.

According to The Straits Times, such cases are not common.

When tempered glass implodes, it shatters into small pieces with rounder edges than that of normal glass, reducing the risk of injury.

Experts say that tempered glass is about four times stronger than untreated glass as it is strengthened through heat.

But the tempering process creates surface stress which, combined with nickel sulphide inclusions created during the glass manufacturing process, can cause the glass to spontaneously shatter months or years later.

In Feb 2019, Stomp reported a similar incident at eCo condominium where a glass door shattered right in front of a family, who then spent several hours cleaning up the mess.