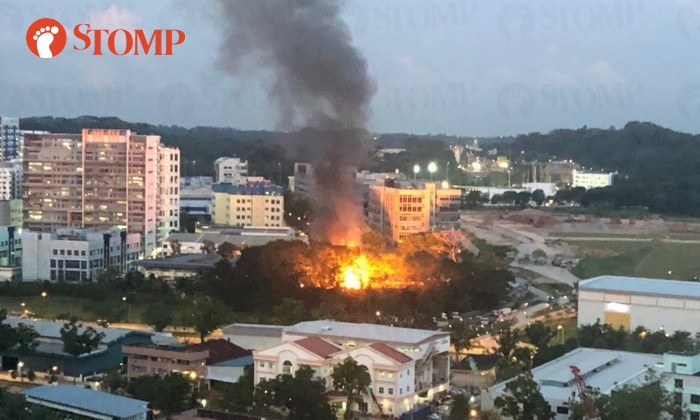 One person was taken to hospital after a fire involving a pile of scrap metal broke out at 228A Mandai Estate on Thursday (Sep 24).

Stompers Xinyin, Alice, Jon, Goh, Anonymous and Mak alerted Stomp to the incident and sent photos and videos of what happened.

In the video, flames can be seen surrounding some trees as smoke billows to the sky.

"While I was cooking in the kitchen, I heard a loud sound from the Sungei Kadut industrial area," said Stomper Goh.

"I was wondering why the industrial area suddenly became so noisy with a “bomp bomp” sound.

"I quickly walked over to the kitchen window and witnessed the fire coming from the industrial area.

Stomper Xinyin also shared that there was an explosion that sounded like "fighter jets".

In response to a Stomp query, SCDF said they were alerted to the fire at about 7.10pm.

"The damping down operation is in progress. The cause of fire is under investigation."