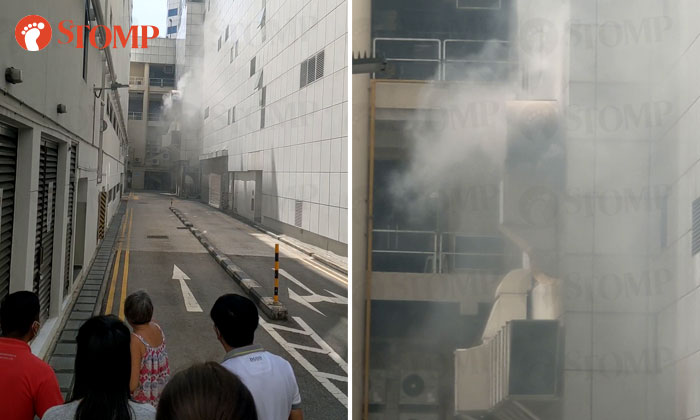 Around 200 people were evacuated after a fire broke out at Orchard Hotel on Thursday afternoon (Sep 17).

The Singapore Civil Defence Force (SCDF) said it was alerted to a fire at about 3pm.

Stomper Stuart alerted Stomp to the incident and shared footage of smoke coming from the hotel at 442 Orchard Road.

"A huge plume of foul-smelling smoke was seen billowing from the vents," he said.

"Kudos to their awesome response time and good job."

In response to a Stomp query, SCDF said the fire involved a kitchen exhaust ducting on the second floor of the building.

"The fire was extinguished by the sprinkler system and two fire extinguishers used by the members of public prior to SCDF's arrival," an SCDF spokesman said.

"About 200 persons were evacuated from the affected premises."

Mr Jean-Philippe Jacopin, general manager of Orchard Hotel Singapore, said in a statement to Stomp: "A small fire broke out in the kitchen of The Orchard Cafe on Thursday afternoon (17 Sep).

"This triggered the kitchen’s smoke detector and sprinkler system.

"The fire was quickly put out.

"Guests were not required to be evacuated and no one was injured.

"The Singapore Civil Defence Force (SCDF) is looking into the cause of the fire."

Related Stories
Man heroically tries to extinguish mattress fire at Punggol void deck
70 evacuated, 4 taken to hospital after fire involving PMD breaks out at Fernvale Link
40 evacuated after fire during wee hours in Clementi: 'It has taken a toll on our well-being'
More About:
fire
orchard
hotel
kitchen
scdf