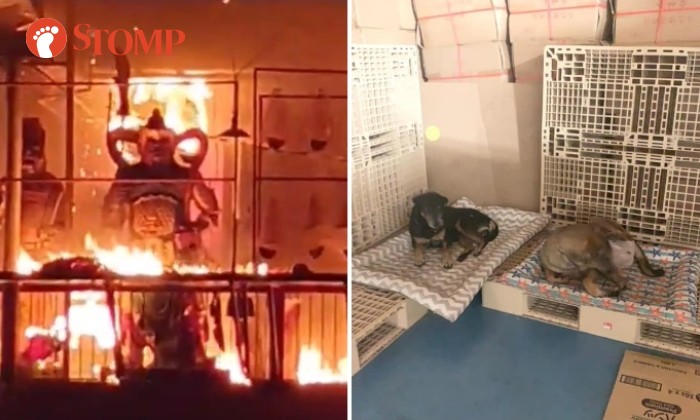 A massive fire that broke out at the Sembawang God of Wealth Temple on Friday night (Sept 18) killed three of the seven dogs that lived on the premises but left the statues of various deities intact.

It took firefighters about three hours, from 9.15pm to midnight, to extinguish the fire. They then continued to spray water on the burnt surfaces for several hours to prevent the fire from rekindling, a process known as damping down.

The temple management said in a Facebook post on Saturday that it had been caring for seven stray dogs.

"We do not chain up our dogs and they are free to roam the temple compound during the night," the temple said.

"Unfortunately, we have lost three of them as they were trapped on the second level when the fire broke out. The remaining four managed to escape and are safe."

Mr Ong said in an Instagram post later that the damage to the temple was extensive but nobody was injured. The statues of all the deities were also "miraculously" intact, he added.

Dr Lim shared photos of the temple's interior on Facebook after the visit, noting that the damage to the first and second floors of the four-storey temple was obvious when compared with photos taken during Chinese New Year.

"What was really surprising was the five statues of the God of Wealth in the main prayer hall were relatively undamaged by the fire," Dr Lim added.

Dear devotees, We would like to make clarifications on some misinformation that has been going around with regards to...

"Kudos to the 12 fire engines and 62 SCDF fire fighters who put out the fire amidst strong winds last night."

The temple will be closed until further notice, it said on Facebook.

"Thankfully, Our God of Wealth Hall and Goddess of Mercy Hall are still intact and we hope to reopen as soon as we can," added the statement.

The Taoist Federation is in talks with the temple management on how to render assistance, its chairman Tan Thiam Lye said.

He told the Chinese-language daily Shin Min Daily News that the Sembawang God of Wealth temple started as a small temple and was painstakingly built up to its current size through years of fundraising.

Visited Sembawang God of Wealth temple with Minister Ong Ye Kung at noon time together with SCDF and temple management...

According to the temple's website, preparations to build the $3 million, 20,000 sq ft temple began as early as 1998. The construction itself began in 2004.

The temple is known for the 9.44m-tall statue of the God of Wealth on its rooftop, said to be the largest of its kind in the world.

Mr Tan added that he will call a meeting with members of the federation next week and urge them to be mindful of oil lamps and other flammable materials in their temples to prevent similar incidents.

Chinese-language evening daily Lianhe Wanbao quoted Mr Chew as saying that Mr Chee had retired as chairman two or three years ago and had been battling an unspecified illness at home since.

Investigations into the cause of the fire are ongoing.