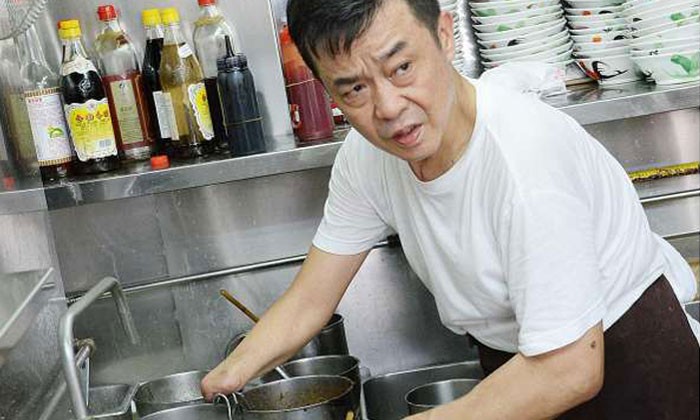 Noodle hawker Yee Meng Yong, who lost his right hand in an accident in 1984, has sold noodles for 22 years to raise his family.

His 24-year-old daughter plans to take over the business in the future as she cannot bear to see him toil any longer, but wants to preserve the art of making noodles, Shin Min Daily News reported on Tuesday (Jan 10).

Mr Yee is the 54-year-old boss of the Punggol Noodles stall, which serves variations of Teochew-style bak chor mee or minced meat noodles at the Lorong Ah Soo Market and Food Centre at Hougang Avenue 1.

Mr Yee lost his right hand in an accident with a concrete mixer in 1984.

But having just one hand did not stop him - in 1995, Mr Yee started making his signature handmade meatballs when he took over the Punggol Noodles business from his father.

Mr Yee, whose wife died in an accident in 2008, admitted to Shin Min that he had started cooking noodles only because of circumstance.

"Back then, my workers would come late and leave early, so I was forced to cook the noodles by myself. To survive, one must make sacrifices, and I had to work doubly hard," he said.

When asked about retirement, Mr Yee said any such talk is premature, but added that his daughter wants to take over the business in future.

The 24-year-old, Ms Yee Ling Ru, started helping out at the stall when she was just eight years old.

"The business was handed down to my parents from my grandpa," Ms Yee told Shin Min. "If nobody takes over it will be a pity. At first, my dad thought it would be too tough and did not want to let me do it. But he changed his mind later after finding that there is satisfaction in selling noodles."

Mr Yee said: "It really is very tiring being a hawker, but I don't intend to retire yet. It's too early to talk about whether my daughter will take over, but I am content."

Mr Yee told The Straits Times on Tuesday that his noodles cost $2.50 to $4.

The stall is open from 7am to 1.30pm daily, but is closed on Mondays and Fridays.

He told the Straits Times that the meatball paste costs $12 per box. More than 30 meatballs can be made with the paste from each box.

Mr Yee told Shin Min that the practice began with regular customers who asked for the meatballs over the years.

He expects to sell more than 100 boxes of meatballs this Lunar New Year.

A customer who gave her name as Madam Yang, a 60-year-old retiree, told Shin Min that she tried the noodles after seeing a long queue at the stall.

"The noodles are springy. And it's my first time seeing a person cook with only one hand. He has a great attitude and it's very awe-inspiring," she said.