Thief in Columbia trapped by bus door, gets free ride to police station 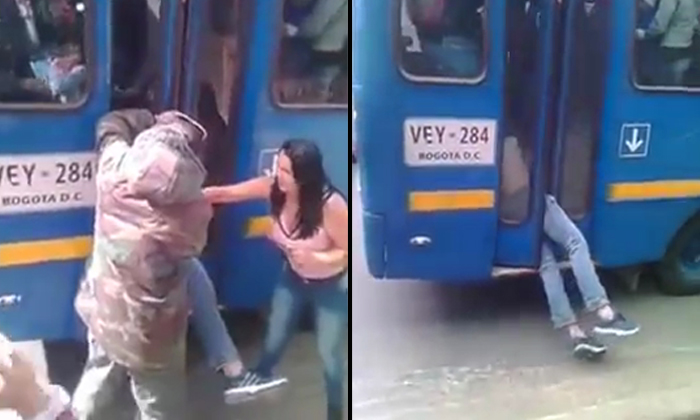 A thief in Columbia’s plan went awry when the driver of the bus he was on trapped him and sent him straight to the police station.

According to Daily Mail, the man had stolen a phone from a woman on the bus. The bus driver, upon finding out, trapped the man between the bus doors as he was alighting.

A video uploaded onto YouTube of the incident in Bogota, Columbia, shows the denim-clad legs of the thief sticking out between the bus doors.

A crowd of passers-by, thinking that the man had been accidentally trapped, attempt to free him. However, after the passengers on the bus explain the situation to them, they stand back and watch as the bus drives away, the thief unable to free himself as the bus continues on its journey.

The bus driver then made a detour to the nearest police station, where he dropped the thief off.

“The driver supported authorities' work and immediately closed the door so that this man was not able to finish the robbery, and was trapped in the bus instead.”

However, the woman whose phone had been stolen decided not to file a police report. As a result, the man was let off.

Residents said petty crime was common in the area.

Related Stories
Serial trickster auntie caught on video twice: Latest video shows how she 'drops' $50 note and walks away with free change and fish
San Francisco janitor who earned S$380k in a year caught hiding in closet during work hours
Scammer auntie caught on third video cheating shopkeeper: Does anyone know who she is?
robbery
thief
theft
bus driver
crime
caught in the act
stealing