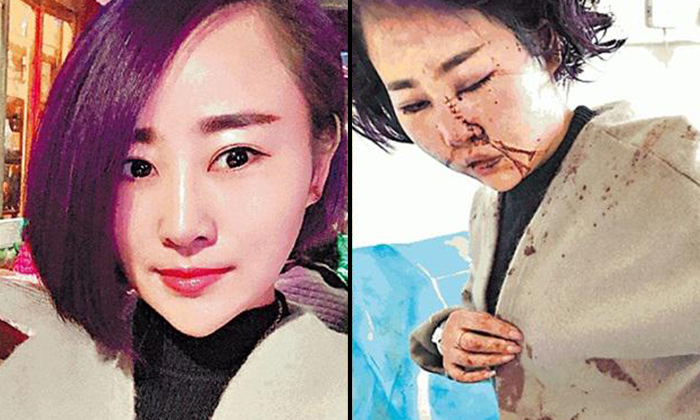 A female tourist from Guangdong recently revealed that she was assaulted by 12 men when she visited a roasted food stall at Ninglang Yi Autonomous County in Yunnan, China, on Nov 11 last year.

According to Lianhe Wanbao, the group not only brutalised her for half an hour, but robbed her afterwards. The vile men then reportedly disfigured her face with glass bottle shards.

The victim claimed that she and her friend were in the shop having their meal when the 12 men entered the shop.

Upon listening to the conversation between the victim and her friend, one man proceeded to ridicule and humiliate them, mimicking their distinct accents.

When the victim asked if the guy was drunk, she was attacked within two minutes.

The men rushed at her and threw beer bottles at her, even forcing her to say she had fallen down and that the wounds were self-inflicted.

The despicable thugs also threatened to bury her alive in the mountains and according to the victim, no one stood forward to help even though the shop was crowded.

After attacking the victim, the men robbed her of her handbag, leaving only her phone.

They also blatantly identified themselves to be locals and taunted the victim to call the police.

"We’re not afraid, you can go ahead and call the cops!" they had apparently said.

After the incident, the victim went to lodge a police report and officers took down her statement.

However, they allegedly refused to acknowledge the severity of her wounds and claimed that they could only make an official inquiry into the matter 90 days after the report.

As the victim could not stomach the injustice, she took to her social media account to vent her frustrations, only to be approached by local cops, who demanded that she delete her Weibo account and the entry.

Yesterday, only after immense pressure and scrutiny from the public, did the police call for the arrest of six of the 12 suspects.

Doctors confirmed that the victim had suffered multiple concussions to her head, several fractures and injuries on her face and lower cheek, as well as damage to her corneas.

Related Stories
Woman spends $12,000 on plastic surgery -- then gets disfigured by best friend because it 'made her look too pretty'
Security guard repeatedly punches 14-year-old daughter for missing night cycling event
Men chase and rain blows on one another, right across heavy traffic: One even flings chair
robbers
China
beating
assault
attack
tourist
robbery