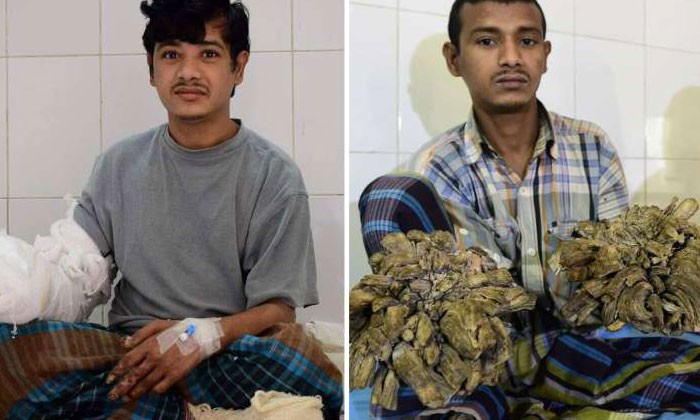 Mr Abul Bajandar has been dubbed as the 'Tree man' because of his bark-like warts which grew from his hands and feet which have been removed after 16 operations.

The doctors' came to know about his condition a year ago and removed the warts which were weighing up to 5kg.

According to Agence France Presse (AFP) via The Straits Times, the 27-year-old former rickshaw driver is one of only four people in the world known to be diagnosed with epidermodysplasia verruciformis, an extremely rare genetic condition.

The condition has been dubbed as 'tree-man disease' which did not enable Mr Bajandar to hold his three-year-old daughter.

"We operated on him at least 16 times to remove the warts. The hands and feet are now almost fine.

"He will be discharged within next 30 days after a couple of minor surgeries to perfect the shape of his hands."

Dr Samanta believes that Mr Bajandar could become the first person to be cured of the disease, provided the warts do not grow back.

An Indonesian man died last year due to the rare genetic condition.

He mentioned how the pain of his condition had been "unbearable".

With a bandaged hand he said, "I never thought I would ever be able to hold my kid with my hands.

"Now I feel so much better, I can hold my daughter in my lap and play with her.

Mr Bajandar comes from a poor village in the southern coastal district of Khulna and became a celebrity after his condition was widely covered by media worldwide.

He had met his wife, Halima Khatun, before contracting the disease but it had taken hold by the time they married, against her parents' wishes.

His daughter and wife had lived in the hospital with Mr Bajandar since he was admitted for the first surgery nearly a year ago.

Doctor Nurun Nahar said, "He is probably the most loved and longest-staying patient in this hospital,"

Mr Bajandar initially thought the warts were harmless but they eventually covered his hands and feet which made him impossible to work.

Now, he plans to set up a small business using donations received from well-wishers across the world.

He said, "I was so worried about raising my daughter,"

Now he plans to set up a small business using donations received from well-wishers across the world.