Woman's severe eczema: She was covered with boils and pus glued her bedsheet to her skin 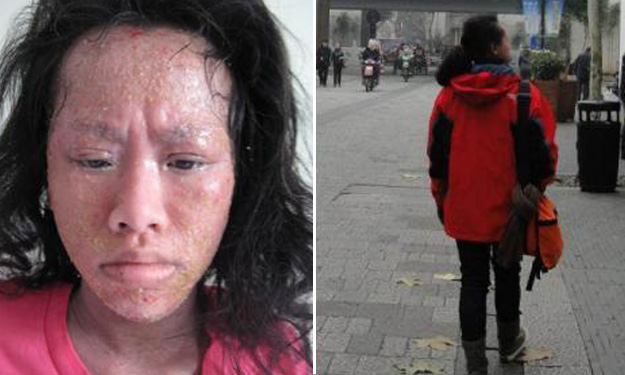 A Singapore woman's appeal for help online has received overwhelming response as she seeks to ease chronic pain caused by a severe case of eczema.

On her GoFundMe page, Ms Eu Hui Ling shared that she has been suffering from the skin condition since she was a child.

Eczema is an incurable chronic skin disorder where the patient's skin is dry, itchy, sensitive, and prone to inflammation, according to the National Skin Centre.

Ms Eu said she had to "endure agonising itch and ugly rashes on her hands, face, limbs, and neck" through the years.

Her condition deteriorated rapidly after she entered the working world about 10 years ago.

Her skin disorder also landed her in the hospital repeatedly, and its debilitating effects caused her to eventually lose the ability to work.

She had to rely on her mother's help to bathe and eat because her fingers were "too swollen and weepy (infected) to be of any use."

The prolonged use of steroids also caused the woman to develop cataracts in her eyes and suffer from osteopenia - a loss in bone density.

Her ordeal made her decide to seek other forms of therapy, as conventional eczema treatment using steroids and antibiotics did not improve her condition.

However, Ms Eu nearly lost her life in her first foray into naturopathic treatment. Pus-filled boils erupted all over her body, and the area around her left knee swelled to twice its usual size.

Doctors said she had a widespread infection which would have led to blood poisoning if she had not been rushed to the emergency department in time.

The woman spent the next two months in hospital, suffering great pain even after being "pumped full of antibiotics and strong painkillers".

On the fundraising page, Ms Eu's longtime friend Jackie shared how eczema crushed her spirit, and "reduced her from an active, fun-loving, outdoorsy individual to someone who was too ill and afraid to step out of the house."

She also described how the skin disorder took a toll on Ms Eu's mental health.

"I watched, helpless, as she fell in and out of depression. Sometimes, it seemed that the pain got so bad that she'd be half-muttering and half-screaming incoherent nonsense."

Now, there is a ray of hope for Ms Eu, who is undergoing Ayurvedic treatment - an ancient healing system that orginated in India - at a local clinic which has kept her condition stable.

At the clinic, Ms Eu met another woman with a similar condition who almost made a full recovery after receiving intensive Ayurvedic treatment at an ashram (spiritual retreat) in India.

She contacted the doctor who assessed her condition and estimated that she would require treatment for at least a month. Each week of treatment would cost about $600.

However, years of failed treatments and hospitalisation have exhausted Ms Eu's savings, and she does not qualify for government or charity aid as chronic eczema is not regarded as a disability.

Hence, Ms Eu and her friends set up a fundraising page last Sunday (March 27), hoping to raise $6,000 in order to send her to get much-needed treatment in India.

As of Tuesday afternoon, over $15,000 has been donated to the former Temasek Junior College student after her alumni was alerted to her plight.

In an update on the fundraising page, she thanked everyone for their contributions and said she would post updates on her treatment.

Ms Eu added: "I also hope that sharing my story and experiences here can give other disheartened sufferers newfound hope, and encourage them to not give up in their quest to find a cure for themselves."