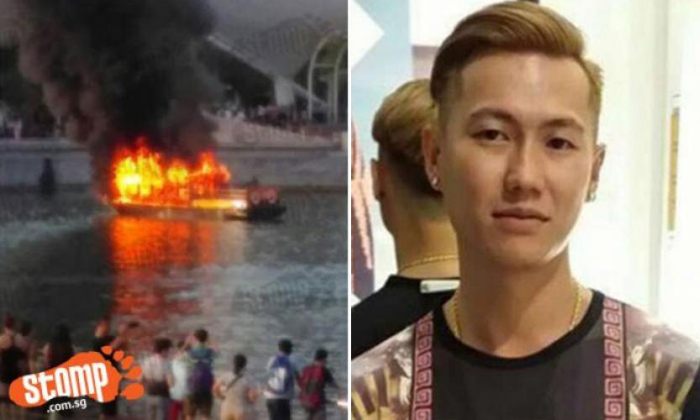 A coroner yesterday recorded an open verdict on the death of a boatman, who jumped from the back of his burning bumboat after torching the life vests on board.

He was later found drowned.

A post-mortem found Mr Ong Hock Long, 32, to have a high concentration of amphetamine and methamphetamine, or Ice, in his blood.

He was the only person on the battery-operated boat.

Though he was known to be able to swim, his body was found the next day in the river.

State Coroner Marvin Bay said yesterday that the drugs had played a major role in Mr Ong's behaviour and may have affected his cognitive faculties.

A forensic pathologist also believed that it was likely Mr Ong had taken the drugs not more than an hour before he died.

Several witnesses saw him becoming increasingly agitated that evening after his vessel had been redirected to pick up passengers on the river taxi routes, instead of running a chartered service at Marina Bay Sands, as initially scheduled.

Witnesses saw Mr Ong's vessel collide with the wall under Elgin Bridge twice and said he appeared to be pacing up and down the boat.

Coroner Bay said a transient state of drug-induced psychosis, rather than the intention to commit suicide, might have triggered the reckless acts, such as committing the arson that led to his death.

Symptoms of such psychosis include severe paranoia or hallucinations.

But it was not possible to accurately tell Mr Ong's intention and the effect of drugs on him, post-mortem.

He had a history of Ice consumption, for which he had done stints in the Drug Rehabilitation Centre twice, in 2010 and 2011.

Coroner Bay said Ice may also "leave the abuser in a tense, fearful and depressed state", and prone to rage and the idea of suicide.

Mr Ong had debts from a failed duck rice business and recently ended a romantic relationship, which the coroner said could have been reasons he might have wanted to end his life.

This may result in abusers exposing themselves to the "pervasive risk of self-harm", whether with or without suicidal intent, he added.