Bumboat on fire near Esplanade: Person still missing after 17 hours 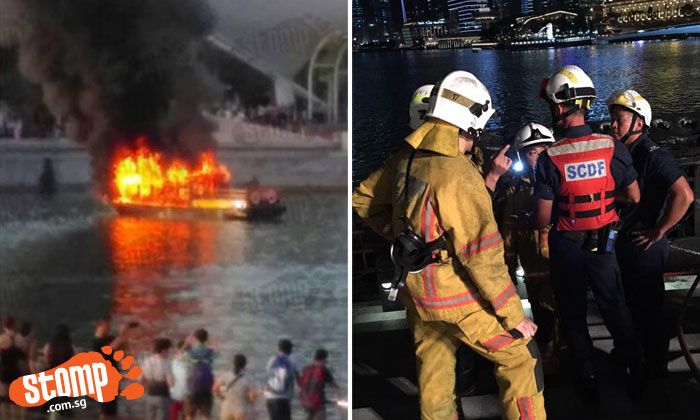 Rescuers from SCDF's Disaster Assistance and Rescue Team (DART) were mobilised to conduct a search operation to locate a missing person after a bumboat caught fire at the Singapore River near Esplanade yesterday (Jul 12).

Stompers Jeffery, Salim, Sam, Mickey, Ah Boy and Bert were at the scene when the fire occurred at around 6.30pm and sent photos and videos of the blaze to Stomp.

The SCDF has said in a Facebook post that there were no reported injuries but there was a missing person from the boat.

In another Facebook post published at around 11pm last night, the SDCF announced that the DART rescuers were still searching for the missing person.

"Methods of search at this moment included point diving at a depth of about 4 metres, employing a circular search pattern from the point where the person was last seen and with the search team moving in a grid formation.

"Besides the challenge of poor underwater visibility at night, the DART rescuers also have to submerge and search through the deep silt of the river bed", said the SCDF.

The SCDF has provided an update when contacted by Stomp at 11.15am today (Jul 13).

"At approximately 12am, the SCDF ceased underwater search operations and resumed with a surface search."

The cause of the fire is still unclear but Stomper Jeffrey reported hearing a loud bang before he saw the burning boat.

"I think the fire was caused by the the boat hitting a wall."