Bumboat on fire near Esplanade: Body of 33-year-old boatman found 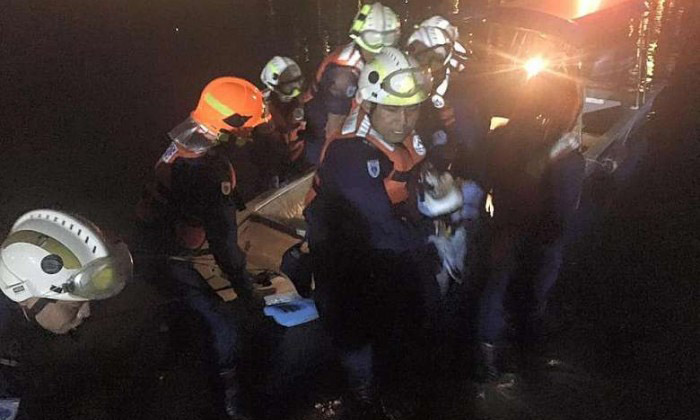 The Singapore Civil Defence Force (SCDF) found the body of a 33-year-old boatman who was missing after his boat went up in flames near the Esplanade.

The SCDF made a Facebook post at 11.25pm yesterday (July 13) to announce that the body was found and that the next of kin had been informed.

Stompers Jeffery, Salim, Sam, Mickey, Ah Boy and Bert were at the scene when the fire occurred at around 6.30pm on Tues (July 12) and sent photos and videos of the blaze to Stomp.

The boatman's company and staff identified him as Mr Ong Hock Long, 33.

He had been taking boat number 36 to pick up passengers from the Esplanade stop when the blaze broke out.

Those who work nearby told The Straits Times what they saw when the boat caught fire.

Ms Maria Louisa, 44, who works at the Merlion stop ticketing counter said: "I saw him jumping off from the back of the boat. Another boat came alongside his boat and a colleague wanted to throw him a life buoy but he did not surface."

Referring to Mr Ong's boat, she added: "We were all waiting for his boat to arrive as it was his turn but it was moving so slowly."

Mr Ong had been working with the Singapore River Cruise (SRC) river taxi service for about three years.

He was the only person on the electric boat at the time of the fire.

Mr Heng Soon Seh, a ticketing crew member in his 60s who has worked for SRC for over a decade, said the boats are equipped with safety vests.

"Each boat has a fire extinguisher, about 30 life vests, four life buoys, and the boat captains can usually swim," he said.

The charred bumboat was moored near the Esplanade before being towed away yesterday afternoon by another boat believed to be operated by Singapore Salvage Engineers.

The Singapore Civil Defence Force (SCDF) resumed its surface search for Mr Ong yesterday morning after calling off the underwater search for him at midnight on Tuesday.

The fire occurred at about 6.30pm on Tuesday and was put out by the SCDF using two water jets from the riverbank.

Initially, the SCDF's search methods involved "point diving" at a depth of about 4m.

The disaster assistance and rescue team (Dart) team, which was moving in a grid formation, employed a circular search pattern, starting from where the man was last seen.