4 drug offenders arrested, 970g of heroin worth more than $68,000 seized in CNB operation at Yishun 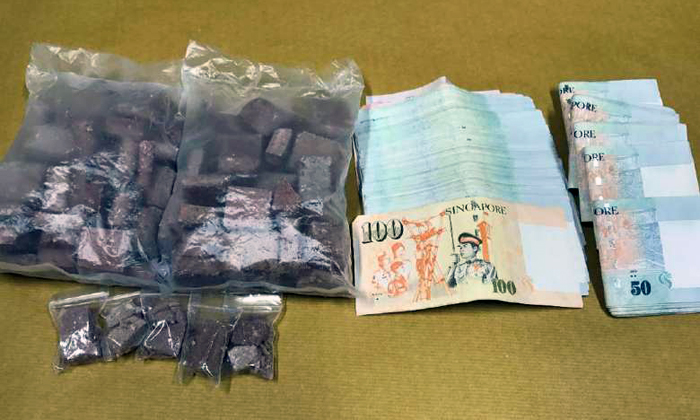 Four suspected drug offenders were arrested and about 970g of heroin worth more than $68,000 seized in an operation by the Central Narcotics Bureau (CNB) on Wednesday (March 1).

CNB officers were deployed at an industrial building in Yishun at 4.20am to observe suspected illegal drug activities, CNB said in a news release on Wednesday.

Two Malaysians - a 48-year-old man and a 45-year-old woman - were spotted arriving on a motorcycle. They then left the motorcycle.

Two Singaporean men - aged 29 and 52 - pulled up in a car at 6am and the older man approached the motorcycle. He then returned to the car and the pair drove away.

CNB officers arrested the Singaporeans in the car along Ubi Avenue 2.

Two packets of heroin, weighing approximately 920g, were found in the car. Another 48g of heroin was found in the 52-year-old's home.

Officers also arrested the two Malaysians at the industrial building.

More than $8,000 in cash was recovered from the Malaysian man.

Investigations into the drug activities of all suspects are ongoing.

Those convicted of trafficking more than 15g of diamorphine or pure heroin can face the death penalty under the Misuse of Drugs Act.

That amount of diamorphine is equivalent to 1,250 straws, enough to feed the addiction of about 180 abusers for a week, CNB said.