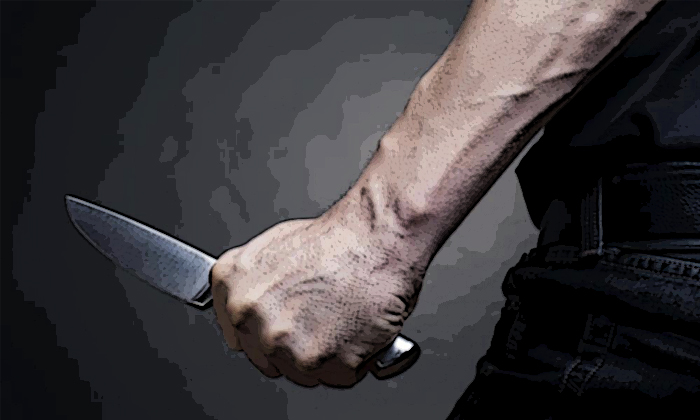 An unemployed man who stabbed himself multiple times in the neck and chest before turning the knife on one of his tenants was sentenced to 6½ years' jail on Thursday (Feb 16).

Lay Chee Leong, 39, admitted last October to stabbing Chinese national Wang Aiyan, 27, and threatening another tenant that he would detonate a bomb in the flat and fill it with liquid petroleum gas (LPG) before igniting the vapours so that everyone inside would die.

The incident happened at a block in Yishun Street 22 on Oct 23 last year. Two other charges of criminal intimidation and attempted suicide were taken into consideration in sentencing.

Ms Wang, then working as an electronic component assembler, and her two colleagues, also from China, were occupying a room in the flat.

Assistant Public Prosecutor Lim Yu Hui had said that Lay stabbed himself repeatedly in the chest and neck with a 22cm-long knife at about 5.30am that day.

He then kicked the tenants' room door open and confiscated their mobile phones as he did not want them to call the police.

Ms Li Hui, 35, was so frightened that she covered her face with a blanket. Lay told her to remove the blanket and pointed the knife at her and Ms Liu Weina, 20.

He left to make a phone call and returned to the room, saying: "Since I am already like this, it does not matter if I kill another one or two".

He also told the tenants not to open the door for the police or he would detonate a bomb inside the flat.

He made them clean up the blood stains on the floor, and warned them not to try anything funny or "he would gas the entire house with LPG and light it up so that they would all die together", said APP Lim.

Lay then stabbed Ms Wang in her neck, before pointing the knife at her friends and saying: "Don't think I don't dare to do it".

Lay's 59-year-old uncle came and took the knife off Lay after he was alerted by Lay's mother.

The prosecution submitted that Lay's psychiatric disorders had a "substantive contributory link'' to the grievous hurt offence at the time. He had symptoms of paranoia and hearing voices telling him to hurt the tenants for trying to harm him when none had done anything to antagonise him.

Deputy Public Prosecutor Eugene Lee said that as Lay poses a danger to the public if he relapses on substance abuse, there is a need to ensure that the period of incarceration is long enough to supervise his abstinence from the substances and wean him off his dependence on substance.

District Judge Low Wee Ping, who backdated Lay's sentence to March 24, said Lay needs an environment with no access to substance he had been abusing, and a period long enough for his treatment.

Lay, who has received at least 50 strokes of the cane for a string of previous crimes including robbery with hurt and unlicensed moneylending, could have been jailed for life or up to 15 years' jail with fine or caning for causing grievous hurt with a deadly weapon.The maximum punishment for criminal intimidation is 10 years' jail and a fine.

Related Stories
Man stabs himself over 8 times then stabs tenant too: 'It does not matter if I kill another one or two'
Man on trial for repeatedly stabbing and slashing student nurse who rejected him
court
stabbing
stab
attack