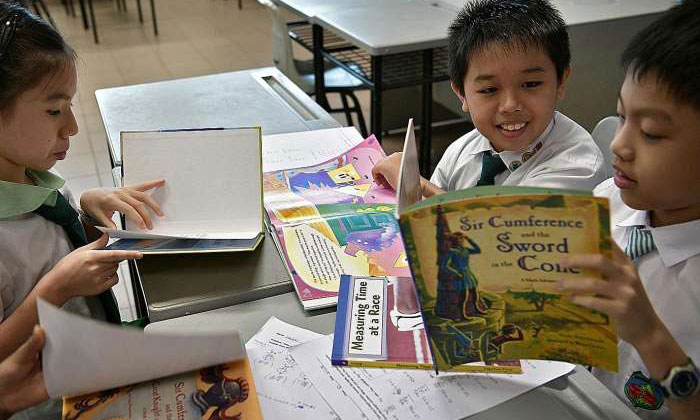 Reading storybooks during maths lessons may sound unusual - but that is the formula that has worked so well at Woodgrove Primary School.

One of the stories is The Number Devil, which is about a boy who suffers from maths anxiety. Over the course of 12 dreams, he is visited by a strange creature who teaches him concepts such as prime numbers and square roots in a fun way.

Primary 4 pupil Tan Hai Yang said he enjoyed the story very much when it was used in class last year.

"The boy at first didn't like maths, but the character kept appearing in his dreams, and he learnt so much," said the 10-year-old. "I like the stories as they are more fun than a teacher writing on a whiteboard and giving long explanations."

This literature-based approach to teaching maths was conceived by Ms Tan Hong Kai, the school's level head of mathematics, who had first used stories to teach a class a few years ago.

The children were so interested they wanted to buy the storybooks to read on their own, she said.

The method was piloted by the school in 2014 and is now used across all levels, although more so for the younger cohorts. The school has more than 50 such educational books on mathematics.

Woodgrove Primary principal Josephine Ng said the aim is to "help children enjoy the subject so that they can learn on their own" through different strategies.

"We want to help them master fundamentals and boost their confidence because maths is critical for secondary school, for polytechnic," she said.

The school also tailors its teaching. For instance, pupils who are weaker in the subject get more guided tasks with more instructions, while stronger ones get more open-ended exercises.

High-ability pupils go for a weekly enrichment programme where they learn through games and puzzles, and there are small-group sessions for those who need more help.

Teachers also let pupils do "investigative" tasks to train them in problem-solving skills instead of simply teaching formulas and concepts. For instance, the pupils could be asked a broad question on number patterns, given some time to think and make conjectures, and explain their conclusions in class.

Primary 6 pupil Lee Ci, 12, said that learning maths has been very "interactive", adding: "Sometimes, we get games and toys like cubes to build things."

Her classmate Gary Gan, 12, said that he enjoys more challenging maths questions as "it is fun to calculate stuff, and problem-solving will help me in the future".