Schools on parade after PSLE results 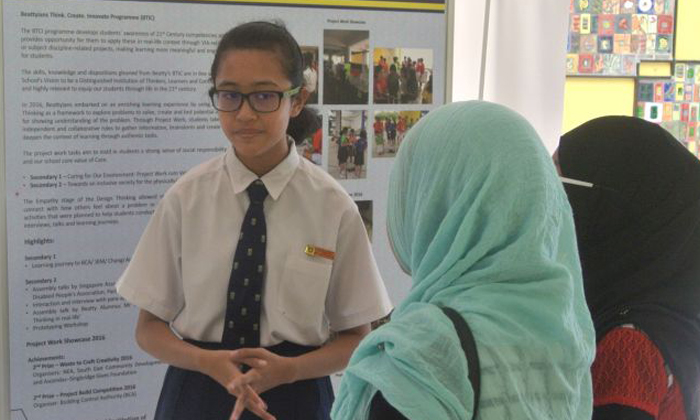 When choosing a secondary school, Aasmiya Mohamed Tahriq, 12, is considering three key points: the school’s cutoff point, proximity to her home, and whether it offers her mother tongue.

She said: “My family and I (listed) several schools around my Primary School Leaving Examination (PSLE) marks and chose those near my home at Farrer Park. Schools not offering Tamil language as mother tongue are also excluded from our list.”

The school will open its doors to prospective students and parents until tomorrow.

It is known for its achievements in the performing arts and uniformed groups.

Its principal, Mrs Marion Tan, said: “(Through this open house) we want to highlight the school’s holistic education, which includes developing our students’ critical and inventive thinking, as well as their information literacy skill.

“Such skills are honed through community or subject-based project work, hence making learning more meaningful and engaging for students.”

Knowing his daughter scored above 220 for PSLE, he zeroed in on schools where the cut-off point last year was between 210 and 230.

They visited several schools to gauge how helpful the teachers were and how the students behaved.

“After this, we’ll discuss which suits her most, which interests her, taking into account our own observation during the open house,” Mr Chew said.

Ms Elleen Goh, 44, was starting a year early, taking her daughter, who is in Primary 5, to the open houses at four schools.

Ms Goh said: “I think it’ll be helpful so she can see what the schools are like, know for herself what school she wants, and work hard for it.

“Her secondary school (options) depend on her marks and her own preference.

“She will be the one doing the homework and shouldering the burden of schooling. So I think it’s fair if she decides where to go.”

What factors can prospective students and parents consider when choosing a secondary school? Experts share their views.

Parenting coach Jason Ng, 51, feels that the decision boils down to finding the right school that suits the child's academic needs - one that is not too rigorous nor too slow.

Mr Ng said: "When the child goes to a school that is academically suitable for him or her, it allows the child to grow and accomplish. And when children accomplish, they gain confidence.

"Feeling accomplished is very important for a child at that age, with teenage angst starting to affect them."

The child's strength in non-academic fields and personality should also be factored in, he said.

"Not every child is all-rounded, and some may be more inclined towards non-academic areas. That's why going to open houses is important, to assess if the school provides ample opportunities to develop your child's strengths, and if his or her personality fits the school's culture," Mr Ng said.

Mr Rai said that CCA options, the method of assessments, the school's niche programme, and distance from home should be considered.

Who should get have the final say, the parents or the child?

Mr Rai suggested that both give their take, but that parents ultimately make the decision based on the information shared between the two.

Mr Rai said: "Primary schools often arrange for secondary school visits, and their primary school teachers may have spoken to them about schools in the area so the child is a source of knowledge, too.

"Children are in the system so they may have heard information that parents may not be privy to."

If a conflict arises during decision-making, Mr Rai said that both parties should let heated emotions subside before they discuss the issue again.

He suggested listing the pros and cons of each school and discussing concerns about each option.

"And let the child know who will be making the decision so this is clear from the start," he said.

Related Stories
KiasuParents co-founder gives her side of story after uproar over her response to son's PSLE results
Choosing a secondary school after PSLE: Involve your kid in selection process
PSLE results will be released on Nov 24
secondary school
PSLE
school
youths
students