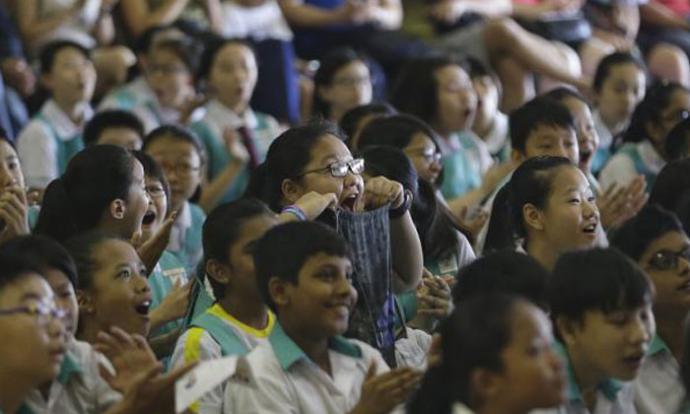 This was after an article by Today newspaper last Thursday (Nov 24) generated an uproar online, with some commenting disapprovingly on her parenting style.

In the letter posted on Sunday (Nov 27), Madam Soon said the article "invaded my son's privacy and affected him - more than his results or my reaction did".

At the centre of the whole episode was a Nintendo DS - a handheld game console she reportedly promised to buy for him if he scored 250.

According to the Today article, Madam Soon's son, who attended Yew Tee Primary School, was expecting to get a T-score of 250. But the report said the full-time mother-of-two was instead expecting three As and a B with a lower score of 230 because she had spotted some questions that came out in the PSLE that her son "normally couldn't do".

When she received her son's SMS that he got all As and a T-score of 229 - her first reaction was "Four As. Better than expected!", said the article, which went on to say that Madam Soon's attention soon turned to the lower than expected T-score.

According to the article, her son then SMSed her "Are you angry?" which she replied: "(You) can forget about getting your Nintendo DS."

Netizens jumped on this, with many slamming her parenting method. Some even offered to buy the Nintendo DS for her son.

In her letter on Sunday, Madam Soon clarified that her son already has the game console, and that she had confiscated it previously as he did not keep to their agreed playing time limit of 30 minutes per session.

She admitted that she did utter the words "You can forget about your Nintendo DS". But she claimed it was said in the context of a "longer private face-to-face conversation with my son".

She added that her request for personal information, such as her son's score, not to be published was not honoured.

Responding to criticism about her parenting style, she wrote: "For those who deplore my son's joyless existence, rest assured that we are intent on celebrating life."

She said they had a post-PSLE treat right after the exams, and that they were looking forward to a family trip, "which was planned before the exams and would have taken place regardless of how the results turned out".

She added: "It's not a reward for my son because I don't believe in tying such experiences to grades - we travel for enjoyment and exposure."