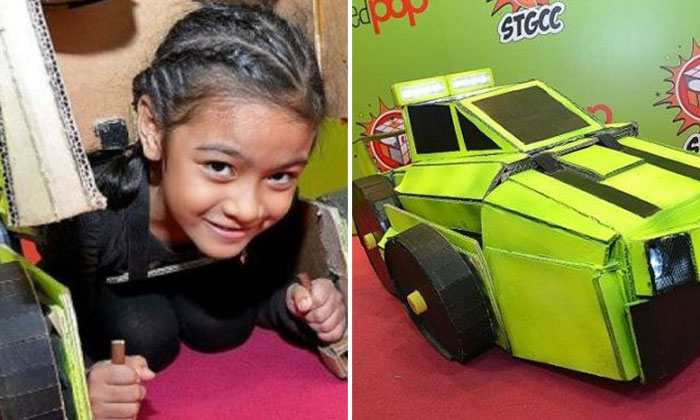 They wowed the crowds with their creations but the young cosplayers had their fair share of attention too.

Fourteen children aged five to 12 showed off their costumes at the Kids Cosplay Parade.

Nur Nyla Qamelia, eight, dressed up as Bumblebee from the Transformers franchise.

Her costume, which was made mostly of cardboard and other recycled materials such as bottle caps, allowed her to transform into a small car - something her character did.

Nyla was excited to speak to The New Paper about her costume.

"My father made this for me," she said.

She added she had to practise manoeuvring in her costume about 10 times before she was able to pull off the perfect transformation.

Her father, Mr Muhd Yusri Mohd Yusof, 40, told TNP that the costume took five months to make as he worked on it sporadically.

"When there are such events, we will go out as a family," the flight technician said.

He added that his family of four shares a passion for characters from the Transformers and Star Wars series.

Mr Guy P. Singzon who cosplayed as Spawn Samurai for the Cosplay Championships. He placed second runner up in the competition.

Sarah, seven, took on the role of Hermione Granger from the Harry Potter series, while Ryan, nine, was a Ghostbuster.

Creating their get-ups was a team effort.

Sarah and Ryan's parents worked together to create the outfits - their mother sourced for the costumes while their father worked on the props.

Sarah waved her wand at this TNP reporter, as if casting a spell. Its tip came complete with an LED light.

HAVING FUN: Ryan Ho, nine, came dressed as a Ghostbuster while sister Sarah, seven, decided to be Hermione Granger from the Harry Potter series.

Meanwhile, music from the Ghostbusters franchise was blaring from the backpack Ryan was carrying.

Their father, Mr Alan Ho, 38, said: "The backpack took a lot of effort as it was made from scraps put together."

The commercial pilot pointed out the DVD player, speakers and wires that protruded out of the backpack. He had spent about $20 putting them together.

"Cosplaying has allowed us to spend more time together building the costumes," he said.

Related Stories
Believe it or not, there's an 11-year-old boy in this university class
Getting dengue fever led student to produce winning project in STEM competition
Kid wants to be the next Joseph schooling -- and boy does he have some neat skills!
More About:
youth
youths
cosplay
creative
talent