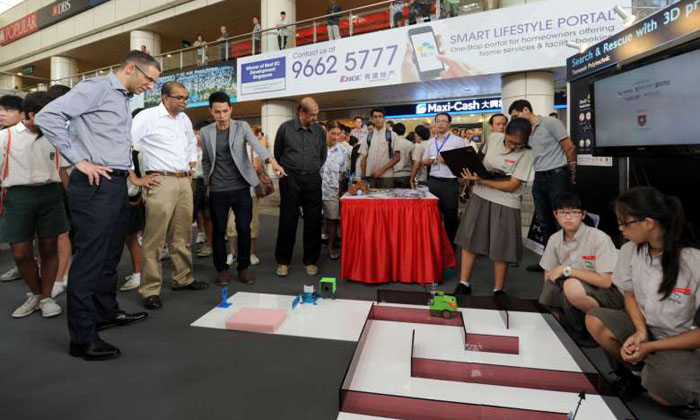 Three months ago, Benedine Tay and her two siblings were felled by dengue fever.

It so happened that the 15-year-old was then working on a project about dengue fever. Her bout of illness further motivated her to decipher why she and her siblings were susceptible.

Applying the skills of data analysis she learnt at Nanyang Polytechnic, she found out that dengue clusters occur with higher frequency around construction sites.

On Wednesday (Aug 24), the East View Secondary School student, along with three others, clinched a second-runner-up prize in their category in Science, Technology, Engineering and Mathematics (Stem) at the Shell Stem Youth Innovation Challenge held in July.

Benedine - whose family lives in Bedok where construction for the upcoming Downtown Line is underway - said: "We had already decided on the topic when I got dengue, but when I got it, I became more motivated to find out what happened, why I got dengue."

She was among some 580 students from 48 secondary schools who participated in the challenge. At the competition's awards ceremony on Wednesday, winning teams showcased their projects to the public.

The competition, organised by Science Centre Singapore's Stem Inc and sponsored by Shell, is separated into five categories, each led by one of the five local polytechnics.

Meanwhile, Nan Chiau High School's Koh Boon Xuan and her team learnt about 3D printing and programming at Temasek Polytechnic. They designed and programmed a robot with 3D printed tools that can conduct a stimulated search and rescue operation.

As a member of the only all-girls team that emerged as champions, she said: "I think people expect boys to be better in this kind of technical projects but I think we broke that stereotype and proved that girls can do it too."