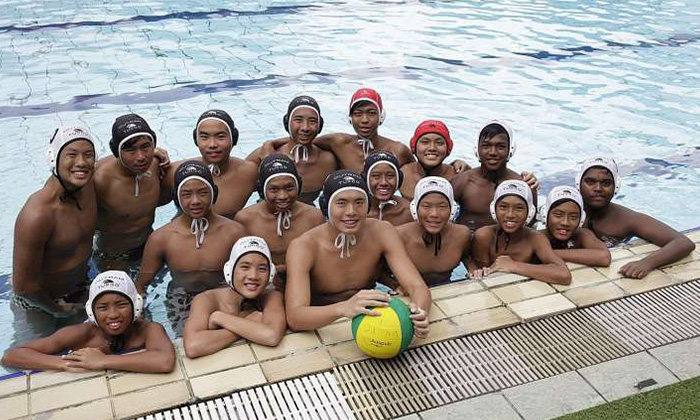 Step into the Outram Secondary School hall and you will see an impressive 10m-high rock-climbing wall. Up the spiral staircase of the main atrium is a swimming pool.

A separate squash complex houses two courts, while an indoor sports hall is used for basketball and netball training.

Just when you think that is all, four storeys up, on the rooftop is its newest addition - a futsal court that offers glimpses of Singapore's Central Business District.

This futsal court was completed this year. During the upcoming school holidays, the rock wall will be replaced with one that features an auto-belay system so more students can climb the wall at a time.

With these facilities at its disposal, it is no wonder that the school takes an approach that goes beyond the classroom - using sports to develop its students under its Sports For Life programme.

All students there learn at least six sports, such as floorball and frisbee, throughout their four or five years of physical education lessons, on top of swimming and rock climbing.

Physical activity is even used to make learning more authentic. Teachers turn physics lessons into a competition, getting classes to build rafts out of recycled materials and paddle them across the swimming pool to learn about buoyancy and hydrodynamics.

It started with the pool, completed in 1977, a rare feature in a government school, the result of lobbying by then chairman of its school advisory committee, Mr David Chew. He believed the pool would provide students with the necessary physical activity since the school - on top of a hill - did not have a field. The school had moved to its current location in York Hill in the Outram area in 1969 after its original site was acquired for urban redevelopment.

But more than just for exercise, sports has helped Outram's teachers inspire and motivate students.

"Teachers (have) become life coaches for the students and look after their all-round development, not just in sports and formal learning, but also in how they have grown in their lives," said Mr Boo Hian Kok, 57, the school's principal.

For instance, Mr Francis Tang, 37, teacher-in-charge of the water polo team, enlists the help of other teachers to support members of his team, who train from Monday to Saturday for four hours at a time.

He incorporates study time into the co-curricular activity (CCA) training schedule, during which the members study as a team half the time. Subject teachers supervise and coach those who are weaker in particular subjects. This move vastly improved the students' ability to manage their time.

Water polo team member Lum Jing Hao, 16, recalled how studying as a team improved his grades. "I found it difficult to balance my CCA and studies initially… I just wanted to sleep when I went home after training," he said.

"But when I studied with my juniors, it became more bearable and enjoyable. When the results started to show, I felt a sense of satisfaction, and that kept me going."

To engage at-risk students to keep them in school after lessons instead of loitering elsewhere, the school's students can use the gym, borrow PE equipment and book the futsal court.

This year, the school's discipline committee partnered the Singapore Police Force to organise a futsal competition for students.

Mr Boo said: "Ultimately, a school is more than its facilities, it is the quality of the interactions within the school that builds up the students' values, character, leadership skills and their readiness for the future. We believe these will be the contributing factors for their success beyond school."