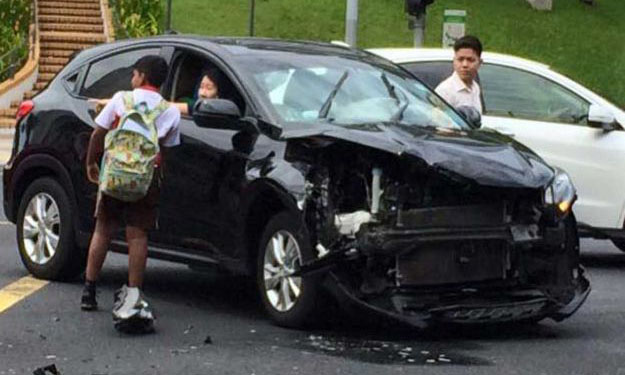 If confronted with a dangerous situation with injured victims, what would your first reaction be?

According to the post, Laava's brother Ashvin was on his way home with friends from a remedial lesson when he suddenly heard a frighteningly loud 'boom' behind him.

As soon as he saw the two car accident behind him, he immediately rushed to the victims' aid despite the dangerous rush of cars and motorbikes impatiently trying to drive around the stationary vehicles.

After helping the first car's driver, who was stuck, open the car door, he hurried over to the second car to see if anyone needed assistance.

As soon as he learned that the second car's driver was pregnant and bleeding, he then hurried back to his friends to tell them to call an ambulance.

When his sister asked him why he didn't ask any adults for help, the 12-year-old replied:

"I don't know! Everybody was so busy crowding around taking pictures or videos. I don't know why nobody came to help!"

His sister, truly touched and proud, then decided to upload a picture of the scene and describe what happened to show others, "It's amazing what a 12-year-old can do that even the other adults couldn't."

Stomper Suresh, one of the many readers of the viral post, described to us how he was also deeply moved by the boy's actions.

"We all have something to learn from this incident.

"We have all adopted a lifestyle where the first thing we do is grab a mobile device to either snap a picture or take a video. Not everyone stands up to help.