Sharity Elephant makes a comeback to encourage students to do good 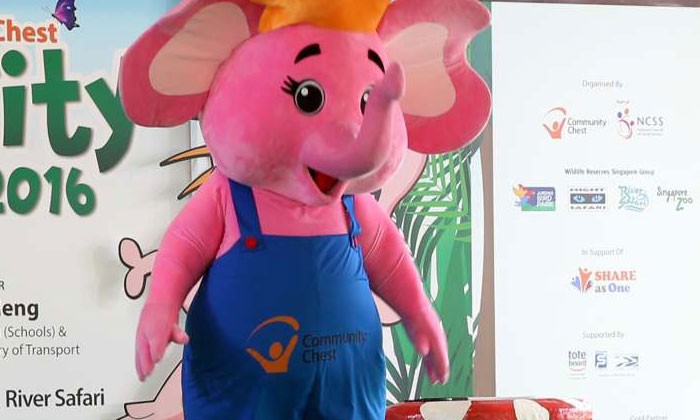 Sharity, the pink elephant in blue dungarees, has made a comeback.

The Community Chest mascot - a combination of the words "share" and "charity" - was first introduced in 1984. It is remembered by most Singaporeans for encouraging them in their school years to donate funds through envelopes.

It stopped being as active in outreach in 2008, but since 2015, with support from the Ministry of Education, it has re-appeared to remind Primary 3 pupils to do good.

More than 72,000 primary school pupils have been part of a Community Chest pilot project to get them to record good actions at home, in school and the community.

Those who complete six deeds from June to July receive a Sharity collar pin from their teachers.

The project is one of several new initiatives by the Community Chest - the fund-raising arm of the National Council of Social Service - to bring Sharity back into the lives of the young.

Other plans include an animation series starring the mascot and his friends, and an interactive website on Sharity to be launched in December.

On Childen's Day next Friday (Oct 7), all Primary 1 pupils will be given a fun pack with stickers to record simple acts such as chatting with grandparents and sharing toys with siblings.

Parents can also write words of encouragement to affirm their children's actions, or donate to more than 80 charities under the Community Chest via an envelope in the pack.

As part of Children's Day celebrations, they also watched a musical on teamwork featuring Sharity and his friends. The performance, which was first put up in 2015, has since toured 20 schools.

Mr Ng Chee Meng, Acting Minister for Education (Schools), was the guest-of-honour at the event.

Related Stories
12-year-old wins the hearts of netizens after helping accident victims at Yishun Ave 2 -- while adults simply take pictures
Tourist raves about how wonderful Singapore is -- and one gentleman proves her right with his kind acts
The Tanglin Club organises ten-hour charity swim for Children's Kidney Centre
More About:
student
students
school.