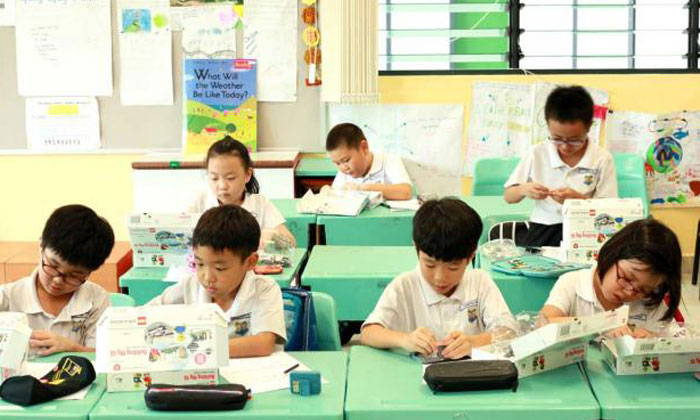 Girls tend to outdo boys academically at a younger age although this gap closes as they enter their late teens and early 20s.

But there was hardly any distinction in qualification to the tertiary level. The numbers of males and females pursuing degrees in local universities have been comparable over the past three years, said the ministry.

For instance, out of a total of 18,126 undergraduates in the 2015 intake for the six publicly-funded universities, 9,192 were female.

Worldwide, girls are better readers than boys across all age groups up to upper secondary.

For mathematics and science, girls also generally do better than boys up to lower secondary but boys outperformed girls at the higher levels.

The disparity in performance between boys and girls is "a complex issue that depends on various factors, such as the subject matter, students' education level, motivation level and behaviours and the education systems", said MOE.

A 2015 report by the Organisation for Economic Cooperation and Development (OECD) on gender equality in education stated that boys' poorer performance in school is likely linked to their behaviour rather than "innate differences in ability".

For example, boys reported that they spent one hour less each week on homework than girls, more time playing video games than girls and less time reading for enjoyment.

But MOE also noted that Singapore's gender gap in results is not as evident as in worldwide studies. In the latest 2015 Programme for International Student Assessment, for example, the difference in reading ability between 15-year-old girls and boys in Singapore was smaller than most other countries' and the OECD average.

The spokesman for MOE said the ministry has initiatives to support academically weaker students, regardless of their gender, such as learning support and remediation programmes.

Psychology experts and educators contacted said while boys and girls develop differently, parents should not oversimplify how they learn, especially at a young age.

Boys, on the other hand, get bored and distracted easily, needing more stimulation and space to pay attention, he added.

They also tend to do better with practical and performance-based tasks, which feature more at later stages of education such as polytechnic and university.

But Assistant Professor Ryan Hong from the National University of Singapore's psychology department said research has largely yielded gender similarities rather than differences.

And these differences, like in maths or verbal reasoning, are usually small, he added.

He noted though that males here may have "matured in the course of national service and that allows them to be more focused and responsible in their university studies".

Mr Koh added: "Boys at times also take longer to determine what they want to do or find interest in something... They usually grow in maturity and discipline by the time they finish army."

Madam Esther Yap, 50, said her daughter, now 18 and in her third year of polytechnic, matured faster than her son, who is now 16.

"From primary to secondary school, he just liked to play computer games. Only at the beginning of this year in Secondary 4 when my daughter pushed him to think about his future, then he focused more on work," added the sales coordinator.

Her son wants to study engineering in polytechnic next year.

"I wasn't worried. I knew he would make it when he knows what he wants to do."

Boys not in a hurry to grow up, says mum

When 14-year-old Nicholas Fung was in primary school, the playful boy spent hours playing video games and football with friends.

His mother, Madam Janice Ong, said: "He seemed to be in a daze in primary school. He was more interested in play."

Compared to his older sister, Jerica, who is now 17, Nicholas seemed to be weaker in his studies, especially in language, noticed Madam Ong, a housewife.

Said the 47-year-old: "In primary school, she was more diligent. She will do her work, follow through and look through her corrections.

"But the boy can make the same mistake again and again.

"Like his friends, he was more into play and games. Even recess is about playing, not eating."

But Madam Ong was not too concerned about her children's differences. "I think it's a natural part of growing up. Boys are usually not in a hurry to grow up." In fact, she saw "signs of improvement in maturity" in Nicholas only last year when he completed Secondary 2.

"Teachers say that he has potential to do well. He studied his hardest for the end-of-year Secondary 2 exams," she said. "He knows now... he needs to be more responsible, otherwise he will face consequences like not getting promoted."

She said: "Boys tend to be more playful but once they set their mind on a goal... they will really work towards it. The school environment and peer pressure also push them to study hard as their maturity level grows."

Today, Madam Ong is glad that both her children have also developed interests of their own - Nicholas is sporty and plays table tennis for his school while Jerica is a musical talent who plays the guzheng.

Nicholas picked up table tennis at the age of six and joined the Singapore Table Tennis Association's Junior Development Squad for primary school pupils. He trains four times a week and has won awards representing his secondary school. Recently, for recreation, he started playing football once a week with a club.

Jerica, now in her first year of junior college, has been playing the guzheng since Primary 1. Two years later, she auditioned and got into the Nanyang Academy of Fine Arts' School of Young Talents programme that trains students in music, dance, art and drama. In 2013, she joined the Singapore Youth Chinese Orchestra and has taken part in local competitions.

Said Madam Ong: "I'm very blessed that my kids have these interests and they enjoy these activities. It just happened naturally.

Better for parents to support children based on learning needs

Boys and girls may have different strengths - with girls being better in processing speed and language, while boys have better memory and mathematics skills.

But children - regardless of their gender - develop differently, and parents should understand their strengths and weaknesses individually, said psychology experts.

Males did better in other areas such as memory, arithmetic skills and the ability to resolve conflicting information, according to the study published in the January 2017 issue of the Journal Of Neuroscience Research.

It is not surprising that girls do slightly better at written tests, said Prof Qu, as the six domains they fare better in are "essential cognitive skills for a student to perform well in the PSLE and O levels, and to learn well in a school setting".

The skills that boys are better at tend to be more useful for hands-on tasks, she added.

But she noted that these differences, although statistically significant in larger population samples, are "relatively small" at the individual level, suggesting that educators and parents should not resort to stereotyping both genders.

Instead, they could support children according to their learning styles and developmental patterns, she said. "Children develop at different paces and, in the end, it boils down to individual learning needs. It does not mean that girls cannot be good engineers," Prof Qu added.

Assistant Professor Ryan Hong from the National University of Singapore's psychology department said in terms of maths and verbal reasoning, there is "no or very small" difference in ability between both genders. "If cognitive abilities do not seem to account for differences, then perhaps temperament or personality might account to some extent," he said. For instance, girls tend to be better in focusing on relevant tasks and persevering while boys may be more physically active and distracted, he added.

Psychologist Daniel Koh from Insights Mind Centre said girls and boys may have varying learning styles - girls, for example, use more inductive thinking, which refers to making broad generalisations based on specific observations.

Boys are deductive thinkers, which means they reach conclusions based on logic.

But, ultimately, a child's performance is also based on his family environment, school culture and his self-belief, added Mr Koh.