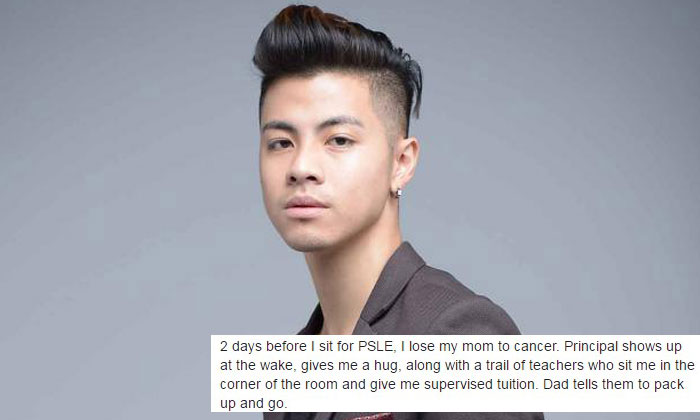 His mother died two days before the first major examination in his life.

And even though years have passed, those dark days stay deep in the mind of Benjamin Kheng.

The frontman of local band The Sam Willows shared a moving Facebook post of his personal tragedy on Friday afternoon, a day after the Primary School Leaving Examination (PSLE) results were released.

Kheng, 26, wrote: "Principal shows up at the wake, gives me a hug, along with a trail of teachers who sit me in the corner of the room and give me supervised tuition. Dad tells them to pack up and go.

"A week later, I stare at my maths paper without picking up the pencil. I flunk way below expectations but miraculously still get picked up by ACS(I) through DSA, so I swim for them. I rank second last in my cohort academically, doing absolute crap in anything that isn't art or literature. Worst kid in the worst class."

He also detailed how he switched schools and spent his "next half a decade fighting to make sense of a system that I know would absolutely cripple a middle-aged, neurotic arts-centric me". Until one day, "a kind lady offers me a job to speak/write for radio".

He tells The New Paper on Sunday: "I wanted to help change the cancerous attitude towards PSLE results. Hopefully it helps some kid out there find peace in the fact that his path in life is so much more beautiful and fulfilling than numbers on a paper."

Kheng is pleased that the post has taken off and touched people.

"I am happy it is going round, and people are getting inspired and touched by it. Virality is a beautiful thing when there is good coming from it. Hopefully it stays that way," he says.

Kheng is not the only personality who took to social media to encourage students. On Thursday night, criminal lawyer Josephus Tan uploaded a short video on Facebook encouraging pupils as "Uncle Joe".

In the video caption, Mr Tan said: "Go easy on yourself, and never give up cos' learning is a lifelong journey and education is truly about having a thirst for knowledge and not grades."

He posted a similar encouraging message last year, disclosing that his PSLE score was 183.

Minister for Social and Family Development Tan Chuan-Jin also weighed in on Friday. In the comments' section of a Facebook post he had made on Thursday, he called for more focus on parenting efforts, rather than exam results.

He said: "I think we are on really shaky ground if PSLE is the main determinant of our children having a happy childhood.

"There are no perfect systems out there. PSLE is one point in a long journey. We as parents shape the experience by the way we approach it and the way we set and manage expectations."

Clinical psychologist Carol Balhetchet says the stress from exams can be good, provided it is a "practised" kind of pressure.

"The stress can be given incrementally and in small doses, like in small daily tests. A healthy kind of stress allows children to develop a fighting spirit," says Dr Balhetchet, senior director for youth services for Singapore Children's Society.

She points out how the pressure from PSLE can be harmful to the process of self-discovery in children.

She says: "These children are just discovering themselves and need an environment full of love. When love is given only when good results are achieved, the children stress themselves out."

She warns that the "humongous drama" over exam results can be detrimental.

"We want children to learn to accept failure and that it is not the end of the world. A lot of failure these days is related to being inadequate, which causes hate, anger and negativity," she says.

"It kind of feels like someone tattooing your results on your forehead - you're forever measured by it academically and even socially."

Kheng feels that if enough people address the "wall" built by PSLE expectations, the pressure put on students will not be so dire.

He adds: "Just a brick in the wall really, but if we keep telling our stories and changing perceptions, this wall will come down."