Groom is about to say 'I do', but then he turns to face his stepdaughter... 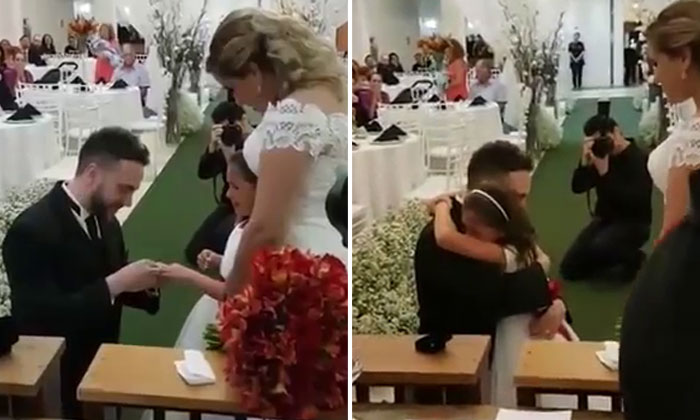 Sure the bride is always the center of attention at a wedding, but what happens when your maid of honour just so happens to be your six-year-old daughter?

Here's 27-year-old Nicole De Souza, whose daughter Isadora stole the limelight when the groom, Diogo Bolant,37, presented her with a ring and proposed to be her father for life, reported LifeBuzz.

We highly recommend you to have a pack of Kleenex while watching the video.

Who does that for their future step-daughter right? How sweet!?

And the best part, it was a huge surprise for little Isadora.

"Do you agree to be my daughter forever?" Diogo asked and of course the six-year-old said yes without hesitation.

Isadora always hoped that Diogo and her mum would get married someday.

And now,  this triad of love is officially a family.

The footage of the touching moment was filmed by the Blessed Space Company, a wedding organizer.

Neither they nor Nicole and Diogo imagined that the video would get so many hits so soon -- they got 9 millions views on Facebook alone.

Evidently, Diogo's love and affection for Isadora is as big as the universe.

Both he and Nicole wanted Isadora to play a big role in their wedding ceremony, and since the six-year-old is at that age where fantasizing about being a bride or a princess is cool, this was truly a dream come true.

Isadora's biological father is in her life, and according to Nicole, no one can take that away from her, and that is okay.

But there is no such thing as having too much love, and Isadora has no issues calling Diogo dad too.

As seen from the video, little Isadora burst into tears of joy when Diogo revealed the ring from the box and then slipped it onto her finger.

The wedding officiant at the ceremony held in Sao Bernardo do Campo in Sao Paulo then blessed this union of three with the words, "So seals the alliance."

However, Isadora wasn't the only one who was brought to tears.

The wedding guests and team of organizers, who knew this was coming beforehand, were brought to tears as well. Now the happily married couple are enjoying their honeymoon in Cancun, Mexico, and Isadora has vowed never to take off the ring her stepdad Diogo has given her.