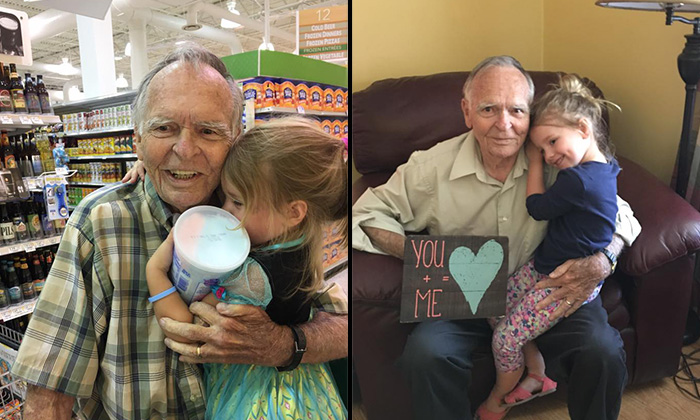 A 4-year-old girl had openly called an elderly widowed man an "old person", befriended him and unexpectedly helped ease his pain of losing his wife.

According to Community Today, writer Tara Woods and her daughter Norah were at a grocery store picking up cupcakes for Norah’s birthday.

Suddenly, Norah, who was standing up in the cart, started waving excitedly and gleefully proclaiming:

What happened next began a chain of reactions that changed the lives of not only the elderly man, but also Tara, Norah, and their entire family.

"Well hello little lady! And how old are you today?" the man asked.

They chatted for a few minutes, he wished her ‘Happy Birthday,’ and they went their separate ways.

However, a few minutes later, Norah turned to her mother and asked, “Can I take a picture with the old man for my birfday (birthday)?”

Tara found the elderly man, whose name is Dan, down a different aisle and asked for a photograph.

After the snap, a conversation flowed between the two, as if they were old friends.

Tara posted the photo of the two new best friends on her Facebook page, and later that night, she received a private message from a local reader who recognized the elderly man.

Turned out, he had a wife named Mary, who had passed away in March, and since then, Dan had been lonely.

Tara then asked the reader for Dan's phone number and eventually made a visit to Dan’s cozy and tidy house.

Tara and Norah ended up spending nearly three hours at Dan's house, talking and having chicken nuggets for lunch.

Before they left, Dan pulled out a pocket knife to cut a single red rose blooming by his porch, and spent ten minutes cutting every thorn off of the stem before handing it to his new friend.

Dan told Tara that he has slept soundly every night since meeting her daughter.

Tara and Norah do visit Dan once every week, and have invited him to spend Thanksgiving with their family.

“Norah has healed me,” he said.

Sometimes, talking to strangers can lead to beautiful new beginnings.