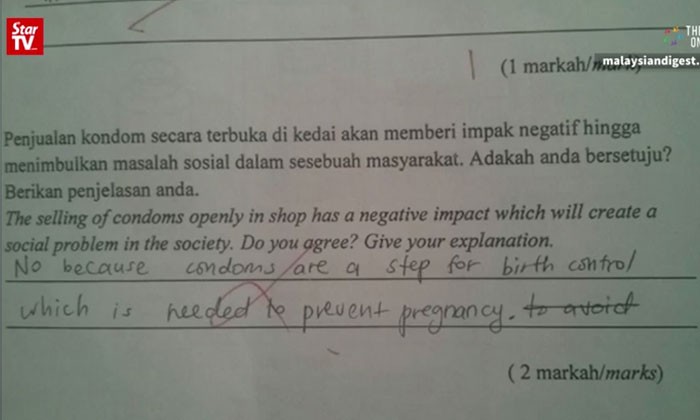 A condom-related question in a Form Three (Secondary 3) trial exam got the Malaysian blogosphere all worked up.

The question that was part of a science exam solicited opinions on the sale of condoms.

It read: "The open sales of condom will bring negative impact to the extent of causing social problems. Do you agree? Please explain."

The student replied: "No. Condoms are a step for birth control which is needed to prevent pregnancy."

However, the examiner deemed this reply to the question, which carried two marks, to be "wrong".

Speaking to reporters after The Star's Newspaper-in-Education Game4Life contest grand finals yesterday, Malaysian Deputy Education Minister Chong Sin Woon said: "Let's investigate and see what the problem is. Something is wrong somewhere as condoms are used to prevent pregnancies."

"HOTS requires students to defend their opinions when answering these questions. We need to respect their opinion," he said.

Former director-general of the National Population and Family Development Board Datuk Dr Raj Karim said it was erroneous to mark the answer as wrong.

"We always say that we have to teach sex education or family life education in school and for children to remain safe and have a healthy lifestyle. It doesn't mean when you teach them about family planning, you're asking them to practise it there and then," said Dr Raj.

"Although sex education is available and taught during Biology classes, students are not taught the ‘hard facts'. The teachers are either shy to talk about it, don't want to talk about it, or just ask students to read it themselves," she added.

Dr Raj also said that frank discussions on such topics should only take place in smaller, gender-segregated settings, rather than in a large mixed classroom due to the sensitivity of the topic.

"It should be (done) in a setup that is more informal where the children can group around and the teacher is able to talk to them," she said, adding that the increase in teenage pregnancies is further reason to advocate a healthy lifestyle and behaviour.

Mr Goh Seng Chui, 46, who has a daughter sitting for PT3 next year, also said it was unfair for the examiner to say the answer was wrong.

"Opinion questions do not have fixed answers which teachers are used to.

"I feel that the problem lies with the narrow mindedness of the teacher, not the question or how the student replied," he said.

Mr Goh argued the fixation with seeing "standard" answers would not just discourage students from voicing their opinions but also drive them to memorise "textbook answers".