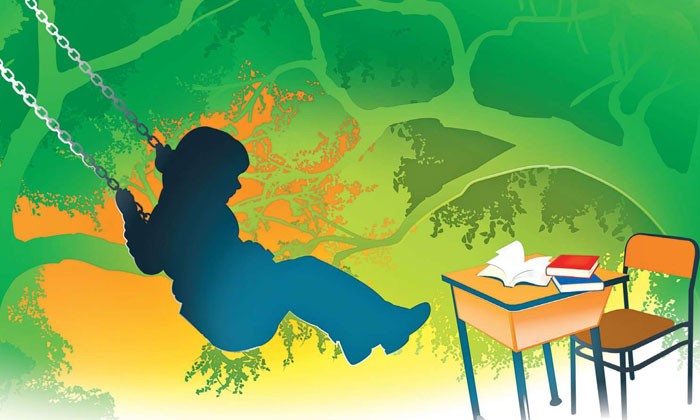 There has been lots of play time after school the past two weeks.

From playing hide-and-seek, to laughing at each other's off-pitch singing, to experimenting with freezing various objects in the freezer, my 10-year-old son and seven-year-old daughter have been enjoying their weekday afternoons together.

And when they are not concocting yet another crazy game or experiment, they are playing with their eight-month-old baby sister, chuckling at her antics or just having fun with her.

Ironically, the reason for the sibling fun is that year-end exams are round the corner - so after-school activities like co-curricular activities and extra classes have been put on hold for my son.

I'm relishing these few weeks of "exam preparation" because it means more opportunities for sibling bonding, more free time to read, play, help me with cooking, or simply do nothing.

Sure, my son has to revise for the exams, but there is a limit to how much he can and wants to study in a day. And once he is done, he is free.

Compare this to a usual school week where he gets home only at 6pm three times a week because of football practice and, occasionally, an extra class. He is now home for lunch every day.

Having them home together for long stretches in the day has meant more bickering, but more fun as well, once they finish quarrelling.

Such weekday afternoons with time for unstructured play is especially precious because once he enters Primary 5 next year, he will have extra classes after school.

Some schools call it supplementary lessons, others call it enriched or enhanced curriculum. It basically means that lessons for the upper levels stretch on past 3pm at least two days a week.

These are not remedial lessons meant for the weaker students, but classes held in the afternoon in preparation for the Primary School Leaving Examination (PSLE ).

So come next year, my son will have extra afternoon lessons twice a week and CCA three times a week.

Schools carry out these lessons differently. Some use them for the usual curriculum, others see them as time for extra practice, so worksheets with more challenging problems are given out and corrections done.

Some parents have pulled their children out of these lessons, preferring them to attend private tuition instead.

My son does not have tuition (for now), but for the many pupils who do, and still attend supplementary lessons, I wonder when they get to rest? Or play?

I saw first-hand the effects of over-scheduling a child when for two weeks last year, my son unwittingly led the life of an over-scheduled child.

Ironically, it was due to post-exam activities offered by his school. We signed him up for a Spoken Malay course, thinking it would be a useful skill to have. The lessons were held daily after school for two weeks.

Learning the language was well and good - but after a week of staying back late every day, I could see it was taking a toll on him. He was tired, less chatty and more impatient - even though he was getting enough sleep at night.

And exams were over so it wasn't stress that was causing it. I can only guess that the lack of free time and lack of play time were causing the difference in his behaviour.

Child psychiatrist Alvin Rosenfeld who wrote the book, The Over-scheduled Child, cautioned parents about the effects of over-planning a child's life, which could eventually lead to anxiety, lack of problem-solving skills and lack of creativity, among other problems.

With plans to remove the over-emphasis on the PSLE, perhaps it is time to rethink school hours for primary school children. After all, it seems contradictory to replace the PSLE T-score with wider scoring bands and then keep the long school hours.

To have time to play and explore, children need more free time after school. But after a day in school, extra lessons, or CCA if any, homework, or tuition for many, it would be difficult to fit play in if a child is to sleep at a decent time.

My daughter in Primary 1 ends school at 1.40pm four times a week, except for Wednesday when school ends at 12.40pm. By the time she has lunch, it is past 2pm on most days. No prizes for guessing which is her favourite day of the week.

Late school dismissal is a phenomenon not peculiar to my children's school, a neighbourhood school. Parents from various schools I meet say school hours are longer now compared to before.

Part of it is due to incorporating Programme for Active Learning into curriculum, so that children get to try their hand at various outdoor or arts activities.

Schools have made up for the long hours by introducing snack time at noon, or lunch breaks to ensure kids do not get too hungry.

All that is well and good, and much appreciated. But I can't help wondering: Are supplementary classes for upper-primary pupils really necessary?

Are teachers unable to finish teaching the syllabus during curriculum time? Or are schools bowing to parental pressure to offer such classes because some schools have them?

Is there a way to fit what pupils need to learn within school hours? And keep the after-school hours for targeted revision, rest or play?

After all, I see my kids honing their negotiation skills when they argue while playing; I see their creativity at work when they use a tripod and bedsheet to build a tepee; I see maths coming to life when they measure ingredients to make pancakes.

And to me, these are just as important as what they learn in school.