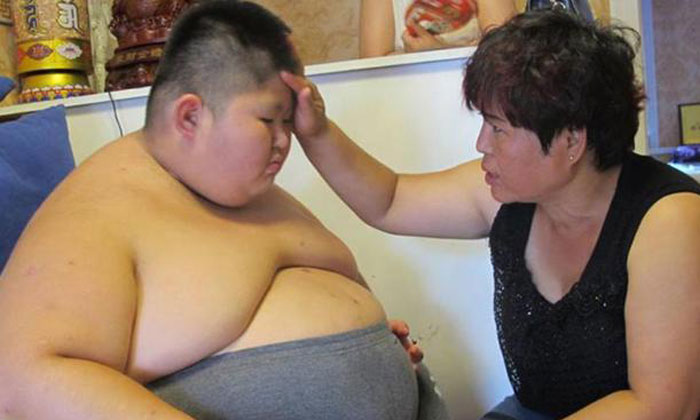 Not because he consciously wants to, but because he's suffering from a rare genetic disorder that causes him to feel perpetually hungry.

Li Hang, who lives in the Chinese city of Harbin, was diagnosed with Prader-Willi Syndrome (PWS) in 2012 and has been struggling with obesity and other associated conditions such as a fatty liver and high blood pressure, CCTV News reported.

The boy also experiences emotional instability and was found to have a below-average intelligence level - both of which are also hallmark characteristics of PWS.

PWS occurs in approximately one out of every 15,000 births, according to the Foundation for Prader-Willi Research.

"PWS affects males and females with equal frequency and affects all races and ethnicities. PWS is recognised as the most common genetic cause of life-threatening childhood obesity," the foundation says on its website.

Despite being born at a normal weight of 2.5kg, Li started gaining excessive weight when he was three.

At one point, he ballooned to 167kg before losing some weight at a "diet camp".

However, in March he regained much of the weight that he lost and underwent minimally invasive bariatric surgery, which typically involves reducing the size of a stomach.

Li has been selling flowers on the streets in Harbin to help pay the medical bills for the various treatments he needs, Daily Mail Australia reported.