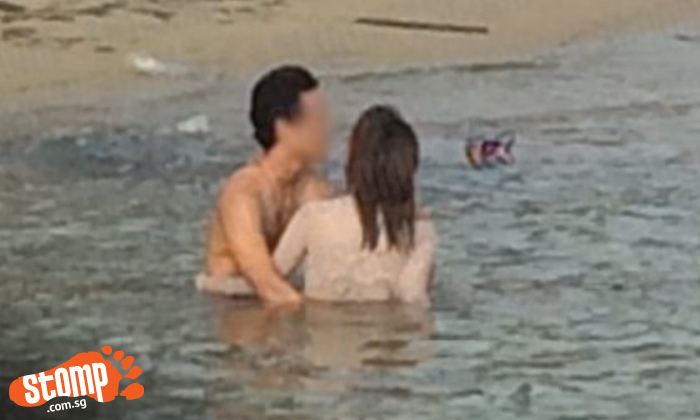 Stomper Anonymous feels that when it comes to couples caught on camera partaking in PDA, it is the fault of both the couple and the onlookers.

I think it’s the couple's own business if they behave intimately in public. One has to be responsible for their own doing. But again, too much intimacy (especially making out), is not really nice. Just go to a room or go home. It is not really appropriate to have sex in public. Other than that like hugging, kissing, or some light touching, is still ok.

There is no hard and fast rule for how much PDA is considered ‘normal’ or ‘inappropriate’ as different people have different views. To me, hugging, kissing or some light touching is still ok, but not openly having sex.

It takes two hands to clap so I would say both the couple and the onlookers are at fault. You can see hugging and kissing almost everywhere nowadays, be it at the MRT or in the shopping mall. It has become quite a common thing for couples to do such things. For such cases, why do onlookers not take photos of them and send them to stomp? They only take photos of what they think is ‘inappropriate’.

I do admit that I do participate in PDA (hugging, kissing, or even touching) with my partner at times. But we try not to cross the limits, like having sex. Furthermore, we try to choose more ‘private’ areas when doing such things.

If someone were to ask me, why not go home to display affection to your partner, I would ask the if they would book a hotel just to hug and kiss with your partner. I guess the answer is NO for most people.

Hence, I feel that nothing wrong if a couple want to have some intimacy outside in the public area. As long don’t cross the boundaries (Like making out), or even at too many people area, it should be fine.

Related Stories
Couple engages in PDA at Sembawang HDB flat -- then hit 'second base' at staircase
Touchy-feely couple 'toy' with each other at Sentosa beach -- as onlookers take pictures
Man puts his hand under GF's shirt and gropes her -- from Marymount to Bishan MRT Station
More About:
PDA
inappropriate
What Say You
October 2016