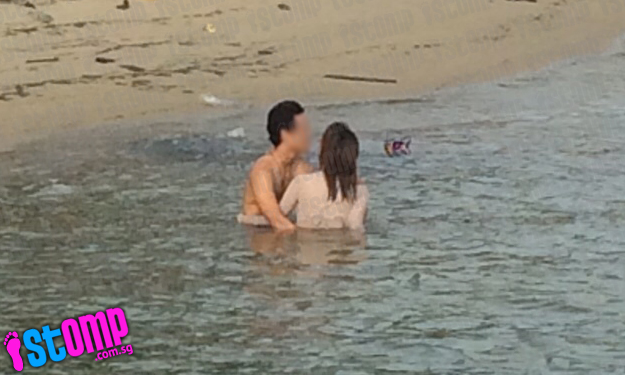 Stomper Ernest's mother was appalled to see this couple behaving intimately at a beach in Sentosa on Tuesday (Jun 23).

They did so despite other visitors including children watching them. In a phone conversation with Stomp, Ernest said that the couple only stopped when onlookers started taking photos.

His mother wrote in an email to Stomp:

"I am a mother of two kids. One Saturday, we decided to head to Sentosa for a swim.

"One of my sons was swimming past this couple and noticed that they were toying with each other's private parts. When he told me about this, I was in shock.

"I can't believe that young couples these days cannot control their temptation in doing all these light petting outside of their own private areas.

"There were a lot of people on the bridge at Sentosa who also noticed their lack of modesty.

"How is this doing the right thing? It's disgusting!"

The Stomper also asked for the future generation to be 'educated'.