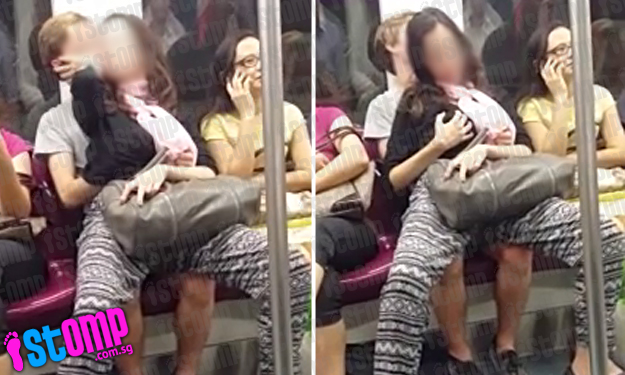 This couple could not keep their hands off each other on a train, and were clearly not shy about expressing their affection either.

They were so engrossed that they did not appear to be fazed by the presence of other commuters such as Stomper Shu, who filmed a video of what happened.

The incident took place on Tuesday night (Mar 24) at around 9pm, during the journey from Marymount MRT Station to Bishan MRT Station.

In the video, the woman is seen seated on the man's lap. He kisses her neck while having one hand under her shirt and on her chest.

This is a gesture she seems to welcome by at times caressing his face and placing her hand over his, but over her shirt.

The couple finally snap out of their reverie when approaching the next MRT stop, but not before sharing one final kiss as seen in the video that is one minute and 32 seconds long.

Stomper Shu described their actions as giving a "live show".

"​I think it is totally inappropriate to do such things on the MRT train," she said.

Stomp will not be uploading the video due to its explicit content.