Woodland resident frustrated after mould infects ceiling, say it's due to leak from neighbour above 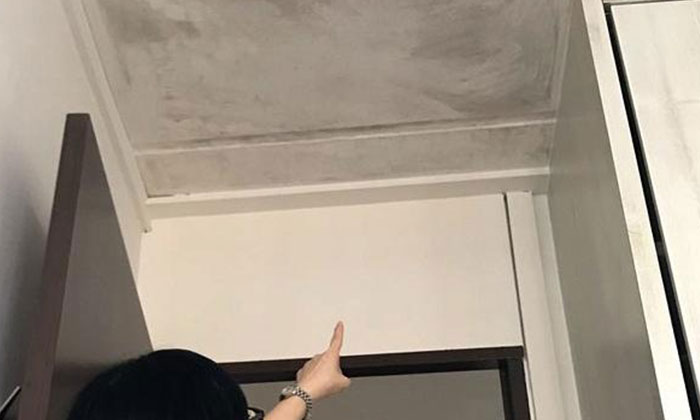 Mould has turned the ceiling a Woodlands flat black, and the owner blames the infestation on a leaking floorboard from the neighbour above.

The 44-year-old owner of the flat at Block 874, Woodlands Street 82 told reporters that she had a friendly relationship with her neighbour until he had a renovation, during which her ceiling started leaking, reports Shin Min Daily via Lianhe Zaobao.

The Housing Board Development said that the growth of mould can be attributed to prolonged usage of air conditioning, resulting in a ventilation blockage.

“There wasn’t a problem until the renovation started.

“I believe the waterproof measures for the floors in the flat above wasn't thorough, which led to the mould infestation.

The resident also revealed that the leaks have been happening for the past two years, but it was only in Jan 2017 that mould started growing on her ceiling.

“The mould have taken over the ceiling in my living room, and has started to spread to the entire unit.

“It is getting unbearable.

“Most of all,  I’m worried about the impact this will have on my children's health.”

The leaks have affected their clothes as well, and she has to do her laundry multiple times just to remove the mould.

The resident told reporters that although she had engaged a contractor to improve the ventilation via the installation of a pipe, the situation did not improve, and within a week, patches of mould appeared on the ceiling once again.

She also revealed that although she had attempted to negotiate with the neighbour, it was difficult for them to meet as he has to travel overseas for work quite frequently.

She hopes that the authorities can help solve the problem.

“I just completed my renovation and repainting the rooms would cost $250 each, so I’m not sure if I can afford that.”