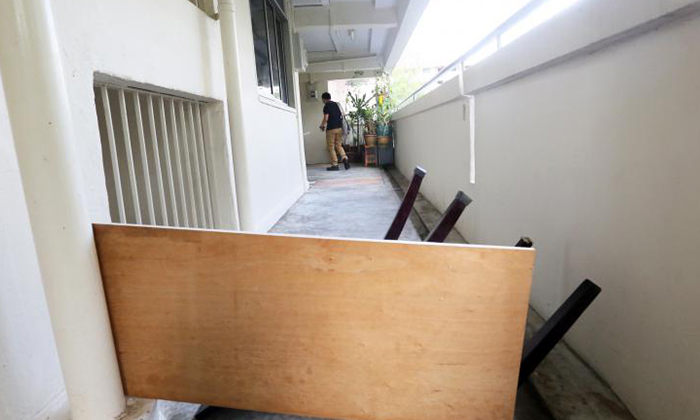 Two residents of Block 112, Yishun Ring Road, accused a neighbour, an auntie in shades of dumping garbage at their doorsteps, and decided to erect a makeshift barrier from a wooden plank and chair to keep the culprit out.

The residents claimed that their neighbour had been throwing trash daily for the past two years and the items dumped range from salt, oil, and dark sauce to even urine and sanitary pads, reports Shin Min Daily News via Lianhe Zaobao.

One affected party, a 65-year-old resident old reporters that since two years ago, someone had been  pouring salt and oil outside her doorstep, causing her gates to rust.

Within half a year, the other neighbour, a 56-year-old resident realised that someone had littered the corridor and dumped trash on her bicycle which was parked outside.

They later discovered that the culprit was a neighbour from downstairs, and she often donned shades before heading out of her house.

The sales assistant said that the culprit would ‘decorate’ her bike with wet toilet paper and various other rubbish, including sanitary pads:

“What makes us even more upset is that she would spray oil, salt water, dark sauce and even urine on the corridors every day.”

According to footage from a CCTV, the culprit would return to the corridor every day with different containers filled with various fluids.

“In the past, she would only do this at around 1am, but since then she has gotten worse.

“She even does this in the middle of the day.

“Because of her, we have to repeatedly wash the corridor.”

At the end of their ropes, the two neighbours decided to come together and build a ‘wall’ to keep the culprit out.

The barrier would keep the culprit about five metres away from the two’s stretch of corridor.

The sales assistant confirmed that the wall was indeed effective in keeping the culprit away.

“What makes us more puzzled is that we never once spoke to her, and had never offended her, yet she continues with her harassment.”