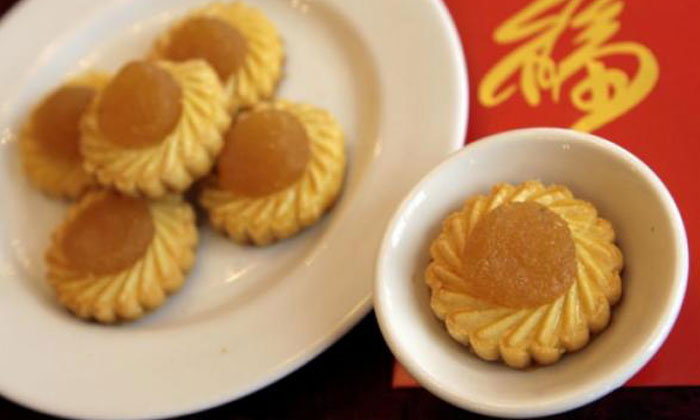 The Lunar New Year is a time to indulge, especially in treats that symbolise all things abundant and prosperous.

Forget about that waistline and dig in!

Bak kwa
Originating from Fujian province in the days when meat was scarce, these slices of preserved pork were a luxury treat reserved for guests and special occasions. Marinated with sugar and spices before being grilled, it is also called long yoke in Cantonese, which means to have robust fortune.

Love letters
Actually crispy egg rolls, they are said to be formerly used to convey secret notes between lovers. The recipient would eat the egg roll to show the words had been taken to heart. Its shape and colour also resemble gold bars, while the inclusion of eggs represents fertility.

Mandarin oranges
Their appearance says it all - round in shape and orange in colour, they look like gold ingots. Even better, its Mandarin name ju sounds like ji (luck in Chinese). Thus, Mandarin oranges not only bring Vitamin C to the table, but also symbolise prosperity.

Roasted peanuts
Often offered to guests still in the husk, they are commonly called hua sheng (flowering of life in Mandarin), offering good wishes for health and growth. They are sometimes known as chang sheng gua (nuts of longevity), as their shape promises a long, healthy life.

Longan and red date tea
The Mandarin name for red dates is hong zao, which means prosperity comes early; while longans, a homophone for dragon's eye, represent the legendary creature's vigour. The ingredients are cooked in a sugared broth with wishes for a sweet life. Ginkgo nuts are often added as their shape represents silver ingots.

Nian gao
With a name that means soaring to great heights in the new year, nian gao (above) traditionally comes in a round shape, symbolising reunion. Its taste also suggests a sweet life. Slices of nian gao can be steamed and eaten with desiccated coconut, or dipped in batter and fried.

Pineapple tarts
This buttery pastry with a sugary pineapple filling is a mainstay of almost every household's ba bao he (eight treasure box). Pineapple sounds like the arrival of prosperity in several Chinese dialects (ong lai in Hokkien and wong lai in Cantonese).

Ingredients for the dining table

Yusheng
Lunar New Year is not complete without mixing the auspicious yusheng (raw fish salad), a tradition known as lo hei (Cantonese for tossing to great heights), where auspicious sayings are called out as ingredients like raw fish slices and lime juice are added. It began as a simple raw fish salad eaten on the seventh day of Lunar New Year, a practice that early settlers from Guangdong, China, brought to Singapore. Thanks to some creative tweaking by four local Cantonese chefs in the 1960s, the tradition of lo hei yusheng has evolved into an elaborate dining must-have at every festive gathering throughout the 15 days of Chinese New Year.

Fish
Called yu, a homophone for surplus, this practically mandatory item should be served whole, as the head and tail represent a year of abundance from start to finish. Raw fish has become quite the ubiquitous dish, as its Chinese name yusheng sounds like an increase in abundance.

Dried oyster
Called ho see in Cantonese, which means fortunate situations or events, dried oyster is usually served braised with black sea moss and dried shiitake mushrooms. Together, the dish has a name that sounds like gong xi fa cai, the common Chinese greeting that wishes someone prosperity and wealth.

Lettuce
Usually eaten raw, sheng cai is a homophone for growing wealth. Used as a wrap for braised abalone, it further implies fertility - young newlyweds are often encouraged to enjoy this. Lettuce also appears wherever there is a lion dance in action, with the lion scattering lettuce leaves to spread good luck.

Black sea moss
This hair-like ingredient (fa cai in Mandarin; fatt choy in Cantonese, meaning to have a windfall) is usually served with braised dried oysters. In recent years, it has also become a part of the popular pen cai (treasure pot) when braised with other premium delicacies such as abalone.

Abalone
Perhaps the priciest and most prized seafood in Chinese culture, abalone is called bao yu in Mandarin, which means a guaranteed surplus. Hence, it is often eaten during the season to ensure good fortune in the coming year. It is so popular that its price tends to skyrocket in the month leading up to the festival.

Sea cucumber
A literal translation of its Chinese name is ginseng of the sea, as sea cucumber is believed to have healing properties, not unlike the famed herbal root. Much like abalone, it serves to impress guests at dinner, while its Cantonese name sounds similar to the term for happiness, making it a must-have.

Chinese leek
With a name like da suan, which sounds like the term for "big counting", it is no wonder the Chinese leek is often served to add flavour - and auspicious meaning - to other dishes. When cooked with prawns (har in Cantonese), it implies counting with laughter and, when mixed with cuttlefish (you yu in Mandarin), it means counting up an abundance.

Longevity noodles
Typically served during Chinese New Year feasts and at birthday celebrations for older folks, these noodles are longer than the regular versions and left uncut, as they represent the hope for a long life. Typically stir-fried with mushrooms and leek, they can also be served in a broth.

Related Stories
So Shiok! I found restaurant quality pasta at simple stall in Food Inn Cafeteria at Revenue House
Stomp intern tries 'best prata' Stomper has ever had in his life
'Next level' airplane food that you will look forward to eating
Chinese New Year
CNY
food