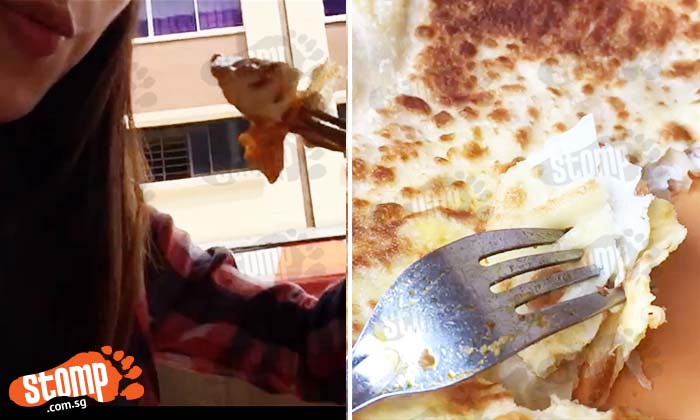 When Stomper Yokohama told Stomp that he had found the best roti prata that he has ever had in his life, we decided to try the local delicacy ourselves from a stall at Block 151A, Serangoon North Avenue 2.

Thus, Stomp's bubbly intern Cindy made a trip to Chindamani Indian Food Stall this morning (Jan 17) to taste the 'crispy roti prata', which Yokohama said is a must-try.

Our intern recounted her experience:

"Initially, I had trouble finding the stall, as it is hidden at the end corner of a coffee shop.

"Upon arrival at 11.30am, I noticed that there was not a queue in sight. However, a small crowd soon started forming at around 12pm.

"Judging from the stall's header which wrote: 'MUST TRY! CRISPY ROTI PRATA', I decided to order two pieces of plain pratas and one piece of egg prata.

"I saw how the food was made, and I was intrigued by how fluffy the dough texture was.

"The plain prata was crumbly, yet not excessively oily, which was undeniably satisfying.

"The egg prata was pretty average, but they definitely nailed their signature crispy (plain) roti prata.

"To each his own, though the prata is not the best and tastiest, it is sure worth a shot!"

Cindy also brought back six freshly made and warm plain pratas for the team to savour.

Our verdict? If you like your prata crisp, then Chindamani Indian Food Stall's roti prata is the one for you.

Check out how the pratas were made and how crusty they look in the video below.