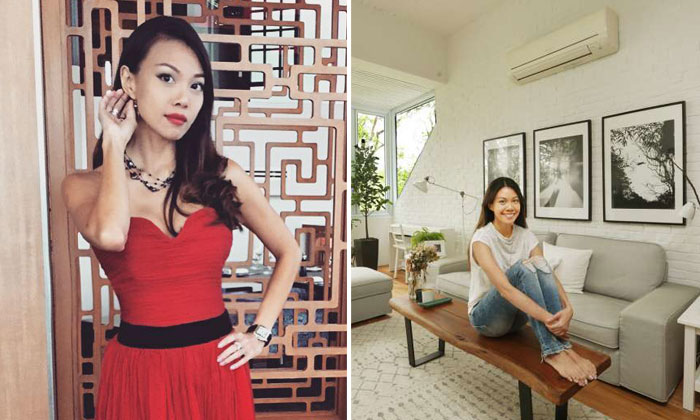 When it came to renovating her two-bedroom condominium apartment at Sunset Way, radio DJ Jamie Yeo wanted a functional and child-friendly home, where she could spend quality time with her six-year-old daughter.

The living room, where mother and daughter hang out a lot, was extended into the balcony to make room for a larger play area.

The furnishings chosen are easy to maintain, functional and affordable, which meant Yeo had to forgo the $4,000 sofa she had in mind for a $600 one from Ikea.

A wise choice, perhaps, since she says her daughter Alysia, who loves to draw, had already left some marks on the wooden Crate and Barrel table in the living room, for which she paid $1,500.

"I wanted something fuss-free for my daughter," says Yeo, 39. "I was considering a $4,000 couch, but I decided against it as it was difficult to keep clean. I'm glad I made practical decisions for my furnishings - kid-friendly was what I wanted."

Her partner and her helper also live in the 1,200 sq ft apartment. Alysia's father is Yeo's ex-husband, Englishman Thorsten Nolte, whom she divorced last year.

The apartment is done up in the Scandinavian style - with white walls and wood accents - as Yeo finds the style cosy. The previous owner, she adds, had preferred loud colours with colourful walls, patterned tiles and dark wood accents, which she did not like.

"I wanted my home to be white, very bright and not too modern- looking," the DJ for Gold 90.5 says, adding that she loves that the apartment has views of greenery from every window.

She moved in on Christmas Eve in 2015 after a two-month renovation, which involved replacing the parquet floors with engineered wood flooring, replumbing and replacement of electrical wires. It cost about $85,000, including custom built-in furniture such as the bookshelf and television console in the living room and the kitchen cabinets.

Although Yeo was specific about what she wanted, she left much of the renovation details to her interior designer, Mr Wayne Chan of Icon Interior Design, as she was often away due to travel and work commitments.

Mr Chan, 36, says: "Jamie was clear about what she wanted and also welcoming of new ideas, which made the renovation process very smooth and enjoyable."

The original yellow-orange wall in the living room was replaced with a white brick feature wall. The wall separating the kitchen and living room was hacked and sliding glass doors were installed in its place, which helps open up the apartment.

In the kitchen, dark tiles with plain-looking white cabinets made way for grey subway tiles and wooden countertops.

Just outside the kitchen doors stands a white bookshelf that stores cookbooks, children's books, board games and bottles of wine.

It may not be the most well-organised bookshelf, but Yeo says: "My style is not over the top and I like a bit of clutter, so I like shelves that are open."

The living room, without a doubt, is her favourite part of the house.