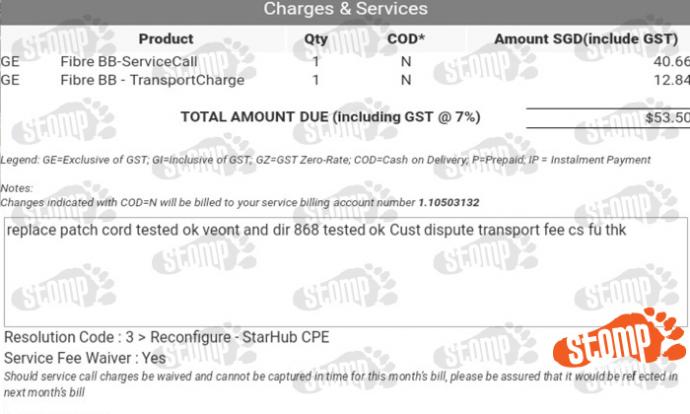 A StarHub spokesperson has responded to an incident where a customer was charged a transportation fee after a fibre optic cable in his home had malfunctioned.

In the report posted on Feb 3, Stomper Bob was perplexed that he was charged transport costs.

He called StarHub when the internet and phone lines in his home had stopped working on Jan 29.

A technician then came down to his home on Feb 2 to change the faulty optic cable.

"We thank Stomper Bob for his feedback.

"We understand the sense of urgency Stomper Bob had felt, as he called us before the end of the agreed 24-hour timeframe needed for further investigations.
"On the same call, we notified Stomper Bob on the charges involved in rectifying a fault in the connection between his in-home fibre termination point and optical network terminal, before scheduling the home visit.

"We have since contacted Stomper Bob and addressed his concerns."