"If the service provider's equipment is faulty, should customers pay transport costs"? 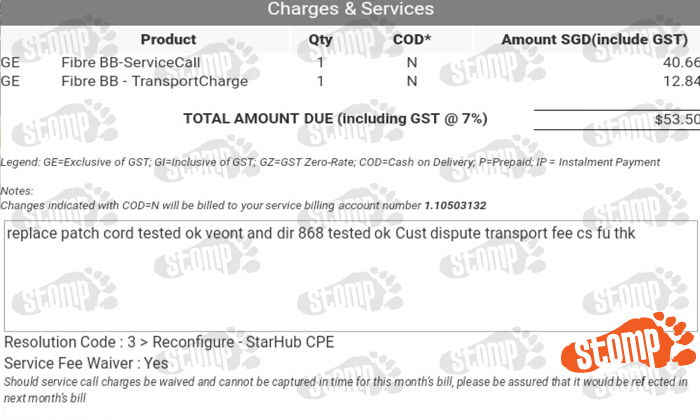 Stomper Bob was perplexed to be charged transport costs when a StarHub technician came to his house to fix a fibre optic cable that had malfunctioned.

Bob said that the internet and phone lines in his home had stopped working on Jan 29, following which he called to report the matter to StarHub.

"StarHub's technical service promised to call me within 24 hours for service, but there was no call," said Bob.

"Called them again on Jan 30 and they said they would send a technician only on Feb 2."

A technician came down to Bob's home on Feb 2 and changed the faulty optic cable.

"My questions are if the service provider's equipment is faulty, should I pay for transport?

"Can I ask for compensation for the the four and a half days of no service?

"Asking me to pay is like asking you guys with mobile phones subscriptions to pay StarHub for disrupted connection and dropped wifi service."

Related Stories
Singtel broadband services restored, affected subscribers to get 10% off bill for Dec
Parking fee shocker at Jurong East: A whopping $116 for 1 hour
Yet another parking fee shocker: At $3513.50, this one takes the cake
starhub
customer service