Singtel broadband services restored, affected subscribers to get 10% off bill for Dec 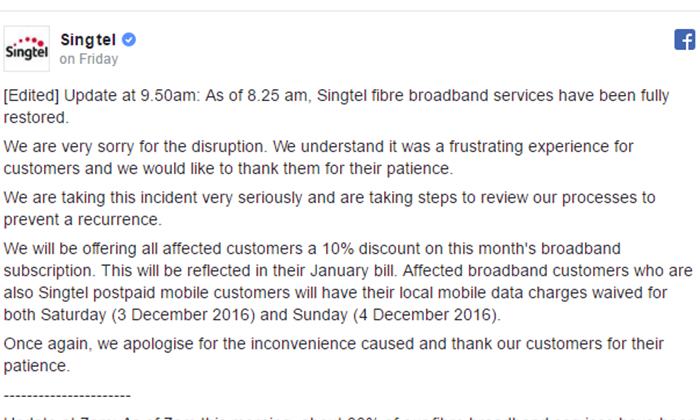 Singtel posted an update on its Facebook post on Sunday (Dec 4) to inform customers that its broadband services have been restored.

"As of 8.25 am, Singtel fibre broadband services have been fully restored," said the telco in its post.

"We are very sorry for the disruption. We understand it was a frustrating experience for customers and we would like to thank them for their patience."

It added that they will be reviewing its processes to prevent a recurrence.

In addition to the waiver of mobile data charges for both Saturday (Dec 3) and Sunday (Dec 4), affected subscribers will get a 10 per cent discount on their bill for December.

Singtel users in multiple areas of Singapore experienced a disruption to their broadband services on Saturday (Dec 3), that lasted for many hours.

The telco made a Facebook post at around 9.45am, saying customers may be experiencing difficulties in accessing their fibre broadband services.

"Our engineers are working to resolve the problem," Singtel added.

At 11.55am, Singtel made an update to the post to say that the fibre broadband service was still down.

It said that its engineers were still investigating the cause of the outage.

The telco subsequently posted an update at 1.30pm, apologising for the disruption and announcing that it was waiving mobile data charges for the day.

It also advised customers who are also Singtel postpaid mobile subscribers to use their Singtel mobile broadband in the meantime.

Following a media statement at 4.20pm and another update at 7.20pm, the issues were still not resolved and customers who had switched to using their mobile data were complaining that either the service was slow, or they were exceeding their data limit.

This was followed by another update at 11.55pm, to say that the offer for free mobile data for affected customers was extended as the issue remained unresolved.