Single women, stand up for yourself this CNY! 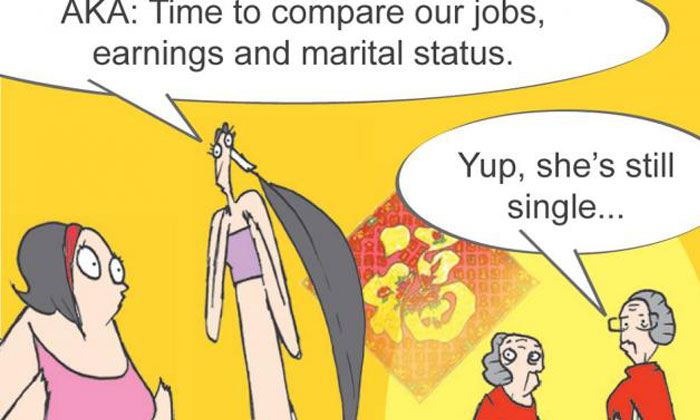 It is called the Great Torrent Of Relatives Prying Into Your Life Which Reminds You Why You See Them Only Once A Year.

This event is not far off now for the Chinese - though in this multi-ethnic society, this misfortune is fairly served up to most women.

There is a pecking order, and it is inversely related to the woman's level of anger levelled at her husband:

Then, the Great Torrent looks for the married woman with three children: She has fallen asleep on the sofa, defeated by that sock that should be on the child's foot, not in her hair.

This is dedicated to those in the first line of defence: Single women above 28 - the median age of married women here.

These are members of a sisterhood who have devised every possible escape plan and strategy to deflect questions that are insults too thinly disguised.

Most women, and perhaps especially those who have defected to the Great Torrent in retaliatory schadenfreude, have been there and been reminded that a heterosexual woman's worth stays tied to the consent and approval of a man.

Here, the Presupposed League Of Extraordinary Gentlemen, generally known as single men, would protest, for they, too, will be harassed.

True, but the level of judgment they face may be quite different. The patriarchy suggests that single men are just biding their time; single women, however, have a deadline.

Time was once a neutral umpire to guide us through decisions, but it picked a side and chose men, so men became women's badge of social acceptance, giving credence to the thoughtless assumption that single women are lacking without husbands (and empty without children).

The questions for a single woman typically insinuate that something is wrong with her: Too tall. Too fat. Too educated. Too extroverted. Too opinionated. Too quiet. Too successful. Too underachieving. Too much of a party girl. Too busy being herself.

And when these women have turned pink under the inquisition, attention will turn to their ticking wombs.

But single women are likely clear-eyed about Singapore's sobering statistics behind the end of marriages, which are slightly on the rise.

A 2015 SingStat paper said that, among the female plaintiffs in civil divorces, "unreasonable behaviour" from men was the most commonly cited main reason for divorce; it is cited by six in 10 female plaintiffs.

Time or children do not necessarily make things better. Among divorced couples in 2015, couples married five to nine years were the biggest group, followed by those married at least 20 years.

More women than men give up on marriages. In 2015, more than six in 10 divorce proceedings were initiated by women.

These points speak of the vulnerability of a union.

Single women should not be rushed into a marriage to be promoted to the ranks of the less-harassed in exchange for a difficult relationship.

Perhaps the implication is that a woman has a problem when she chooses to be alone. But do eating, reading, travelling and being on one's own make her a social pariah?

Solitude is freedom, especially when she has the spending power and space to make choices independently of a wrong spouse or an imposing crowd.

To give up that inner peace under pressure for an aching loneliness that several married women bear is a poor trade-off.

The bigger error is society's, for not acknowledging that narrow band of approval within which women tiptoe, and a higher expectation that weighs on them.

This isn't difficult to establish: Praise is lavished on men who do housework, reinforcing the stereotype that too many men (conveniently) cannot wield a mop right.

Women bear an outsized workload and discrimination. Their choices can be harder when the world carries on demanding much from them.

So our hearts go out to single women this year, and we say: "Pay the indignity no heed. Singlehood is not brokenness, and there is much to envy about pursuing a higher purpose: being whole, on your own."

Related Stories
Queue for CNY bak kwa starts early for this chap... at 12.20am
Chinese woman devours two durians on the spot after being stopped from taking the fruits on the train
CNY
funny
hilarious
tips
family
friends
boyfriend
girlfriend