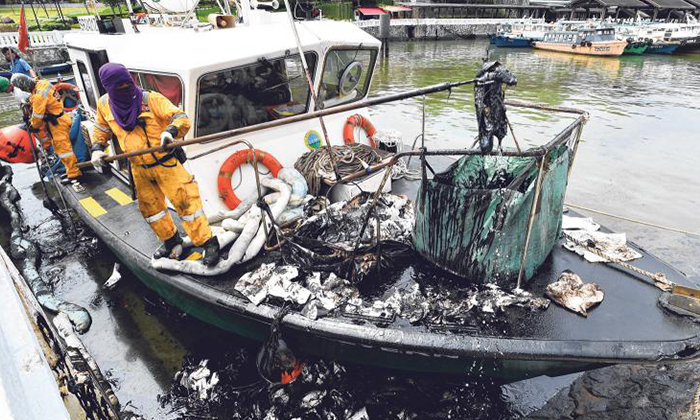 SINGAPORE - Patches of oil have been spotted along Singapore's beaches, after an oil spill occurred in Johor waters on Tuesday (Jan 3).

According to a statement from Maritime and Port Authority (MPA) of Singapore on Thursday (Jan 5), the oil has washed up on shorelines of Pasir Ris Beach, Changi Point Ferry Terminal, Changi Sailing Club and Changi Beach.

In an update on Thursday, the National Environment Agency (NEA) said that cleaning operations have completed at Pasir Ris and Punggol beaches, but are still ongoing at Noordin beach in Pulau Ubin and Changi beach.

The 800m stretch of Changi beach affected by the oil slick has also been closed to facilitate the clean-up.

Members of the public are advised to exercise caution when visiting these beaches and to avoid the affected stretches.

NEA added that it is monitoring these beaches as well as the quality of the seawater.

According to The Star, the Johor Port Authority (JPA) confirmed that failure of the generator set on a Singapore-registered vessel caused it to collide into another vessel on Tuesday.

JPA said in a statement that Wan Hai 301 experienced generator failure, causing it to lose control and crash into APL Denver, a Gibraltar-registered ship, that was docked at Johor Port in Pasir Gudang at around 11.05pm.

It also confirmed that some 300 tonnes of marine fuel oil had leaked from APL Denver and the Singapore authorities were alerted to contain the oil slicks that had shifted into Singapore waters.

Watch a video on it below.